In this post I show some experiences with inverting a large, dense matrix. The variability in performance was a bit surprising to me.

I have available in a GAMS GDX file a large matrix \(A\). This is an input-output matrix. The goal is to find the so-called Leontief inverse \[(I-A)^{-1}\] and return this in a GAMS GDX for subsequent use [1]. It is well-known that instead of calculating the inverse it is better to form an LU factorization of \(I-A\) and then use that for different rhs vectors \(b\) (essentially a pair of easy triangular solves). [2] However, economists are very much used to having access to an explicit inverse.
A GAMS representation of the problem can look like:
The problem at hand has a 4-dimensional matrix \(A\) (with both regions and sectors as rows and columns). Of course, the real problem is very large. Because of this, a pure GAMS model is not really feasible. In our real data set we have 306 regions and 63 sectors, which gives us a \(19,278 \times 19,278\) matrix. The above model would have a variable and a constraint for each element in this matrix. We would face a model with 371 million variables and constraints. Below, we try to calculate the inverse using a standalone C++ program that reads a GDX file with the \(A\) matrix (and underlying sets for regions and sectors) and writes a new GDX file with the Leontief inverse.

Here I use the Micosoft Visual C++ compiler, with the Eigen [3] library. Eigen is a C++ template library. It is very easy to use (it is a header only library). And it provides some interesting features:
The results are: 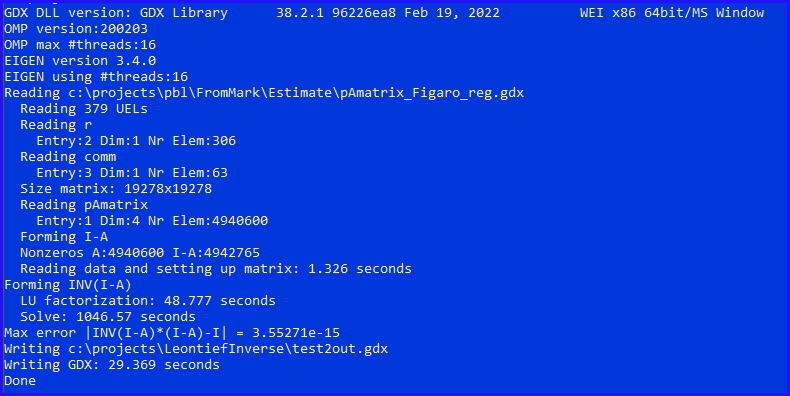 Notes:
Why is the solve so slow? The following pictures may show the reason:

Basically, during the solve phase, we only keep about 2 cores at work. I would expect that multiple rhs vectors (and a lot of them!) would give more opportunity for parallelization. I have seen remarks that this operation is memory bound, so adding more threads does not really help.

Attempt 2: Intel/Clang with the MKL library.

Here I changed my toolset to Intel's Clang compiler icx, and its optimized MKL library. The Clang compiler is part of the LLVM project, and is known for excellent code generation. The MKL library is a highly optimized and tuned version of the well-known LAPACK and BLAS libraries. It is possible to use MKL as a back-end for Eigen, but here I just coded against MKL directly (I just have one LU decomposition, an invert, and a matrix-multiplication in the check). So how does this look like?

This looks much better.
Notes:

Intel/Clang/MKL can be much faster than MSVC/Eigen on some linear algebra operations. The total time to invert this matrix went from > 1000 seconds to  < 100 seconds:

Posted by Erwin Kalvelagen at 6:32 AM