Is a heuristic a solver?

Can we call a heuristic (especially a meta-heuristic) a solver? I am not so sure.

Warning: this is somewhat of an opinionated rant. Many of you may not agree.

The name "solver" seems to imply that the underlying algorithm knows when an optimization problem is solved. By that I mean: it can stop at some stage and report "solved". Meta-heuristics typically don't have a clue about optimality, and just keep on churning until hitting some form of time or iteration limit. (One could devise some stopping criteria basic on stochastic reasoning, but that is not often used in meta-heuristics).

So my proposal is:

Heuristics (including meta-heuristics) should not be called solvers. They don't know when a problem is solved.

Read more »
Posted by Erwin Kalvelagen at 6:26 AM No comments:

In [1] the following problem is proposed:

The user expects the number of nodes to be between 20 and 50, and there are just a small number of colors.

The picture shows a complete graph (all nodes have a direct arc to each other) with 10 nodes. The optimal coloring of nodes minimizes the sum of weights along the colored edges. An edge is colored if the two incident nodes have the same color.

Coloring the US county map

A famous result in graph theory is that we can color a planar graph with just four colors [1]. The MIP model for coloring a graph is really simple. Let's try this with a relatively large data set: the map of US counties. We'll see that there are some hurdles on the way.

The problem is as follows: we want to assign a color to each node such that nodes connected by an arc don't have the same color. The objective is to minimize the number of different colors. For the MIP model we use an assignment variable:  \[\color{darkred}x_{n,c} = \begin{cases}1 & \text{if node $n$ gets color $c$} \\  0 & \text{otherwise}\end{cases}\] To keep track of the colors we have: \[\color{darkred}u_c = \begin{cases}1 & \text{color $c$ is used for some nodes} \\ 0 & \text{otherwise}\end{cases}\]

In [1] a graph problem is proposed:

Notice that nodes can be visited several times. I thought this could be a good job for a solution pool approach.

As I am more familiar with directed graphs, let's start with setting up a small random, sparse, directed graph.
I start with 10 nodes and say there is a 20% probability that a link exists between two nodes, \(i \rightarrow j\). So the data set looks like:
Using \(n_1\) as the start node and \(n_{10}\) as the end node, we can visualize this as: 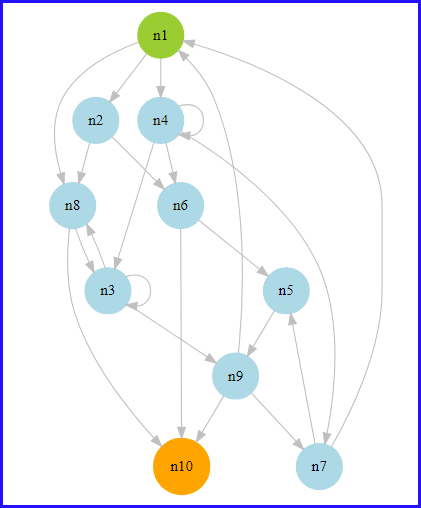 Read more »
Posted by Erwin Kalvelagen at 7:10 AM 7 comments: