I am doing something really wrong here:

The gaps between the MIP bounds are larger than I have ever seen and don’t seem to get close anytime soon.

I am trying to make it easy to make high-quality maps for presenting model results. See: http://yetanothermathprogrammingconsultant.blogspot.com/2014/01/maps-from-gams.html. One rule of thumb: don't use a rainbow color scheme when trying to display numeric data. Here is an example where they actually seem to use random colors. Note that these colors do not help you to quickly grasp where high and low GDP growth occurs. 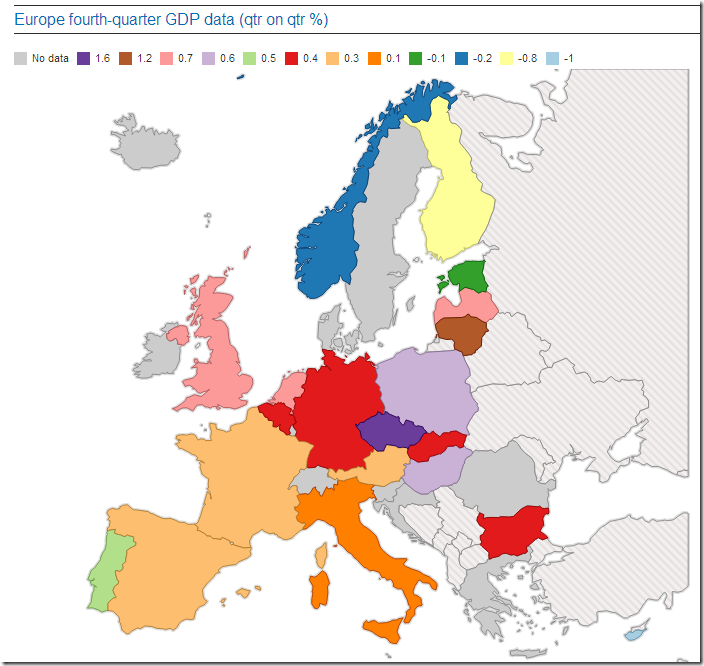 From: http://www.theguardian.com/business/interactive/2014/feb/14/eurozone-economic-growth-gdp-map.
Posted by Erwin Kalvelagen at 10:19 PM No comments:

When translating an Excel spreadsheet model using Solver into a GAMS model, I came across a construct like:

This can be modeled as a linear condition:

One disadvantage of using Excel as a modeling vehicle (a major one in my opinion) is that it does not really allow you to think about the model formulation. The formulas are hidden behind cells and the model structure is largely lost. Even easy model reformulations will escape attention.
Posted by Erwin Kalvelagen at 3:19 AM No comments:

Parallel R for making many maps

When making many maps (http://yetanothermathprogrammingconsultant.blogspot.com/2014/01/maps-from-gams.html) it may make sense to try to exploit multiple cores. I have 4 on my laptop. It came with hyper-threading turned on so it looks like the machine has 8 cpus:

In R there is a nice parallel foreach construct (see: http://cran.r-project.org/web/packages/doParallel/vignettes/gettingstartedParallel.pdf). As each map is independent of each other, this offers an obvious way of parallelizing the generation of many maps. The results are quite good:

Now we are in R anyway, let’s make a quick plot: 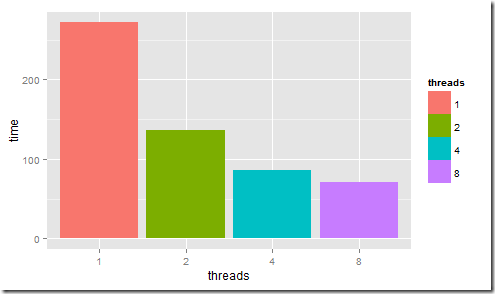 Notice that even going from 4 to 8 threads helps (I did not expect that; conjecture: this may be related to being able to do other useful work while doing disk I/O). In the 8 thread case we have a bunch of Rscript.exe processes running:

We can keep all cores quite busy:

There are several ways to implement a thing like this. A serial approach could be:

In general it is better to call expensive external programs once instead of inside a loop. Of course this moves some complexity from GAMS to the R script. Inside the R script we do the following:

When implementing a parallel version I could have used a parallel construct in GAMS (see: http://yetanothermathprogrammingconsultant.blogspot.com/2012/04/parallel-gams-jobs.html). However it was just much easier to use the parallel foreach loop in R. This just required:

There are at least two ways to get data from GAMS into R. Use the tool gdxrrw (http://www.gams.com/presentations/informs2012_gdxrrw.pdf) which allows reading and writing GDX files from within R or use a database representation in between. Here we use gdx2sqlite and the SQLite database (http://yetanothermathprogrammingconsultant.blogspot.com/2013/10/gdx2sqlite.html). Here are some differences:

Another difference is that columns related to GAMS indices have a different type (factor v.s. character vector). The database interface always returns character columns as such, without translation into factors (even if getOption("stringsAsFactors") is true, which is actually the default).

R allows downloading and installing packages without specifying the version number: you get automatically the latest one. Unfortunately for gdxrrw you need to specify a complete version.

Posted by Erwin Kalvelagen at 11:49 AM 2 comments: