I am working on a model for scheduling TV advertisements. Looking at the paper: http://citeseerx.ist.psu.edu/viewdoc/download?doi=10.1.1.37.292&rep=rep1&type=pdf this is easy to model (but difficult to solve). My model seems at least 10 times as complicated than what this academic study suggests. We needed more complexity to deal with:

Posted by Erwin Kalvelagen at 12:06 AM 5 comments:

My assessment was clearly not convincing. To summarize: essentially the modeling framework Pyomo is a scalar system. This compares somewhat to the difference between AMPL and GLPK (http://www.gnu.org/software/glpk/glpk.html). Both systems are written in C so we have taken out the language issue (i.e. Python is slow compared to C). The modeling system in GLPK (called Mathprog) is dense (except for the final generated matrix which is of course sparse). This actually work in many cases just fine: many sub-matrices used in the model are often small enough that dense handling is not really a problem. I have seen this in my practice: the majority of the models implemented in GLPK/Mathprog just work fine. Of course there are some models (the big sparse suckers) that bring GLPK/Mathprog on its knees while AMPL will happily generate the model very quickly. If I see this I generally suggest some reformulation or more often just give the advise: buy AMPL.

I suspect this can also happen with Pyomo. For some models a simple dense/scalar structure where we iterate over the carthesian product of indices will not perform. Of course with a system like Pyomo the modeler has more possibilities to implement better data-structures so we can skip zeros quickly and efficiently. But that means we have moved the burden from modeling system to the modeler.

One of my clients is applying for a patent on a model I helped them with. I am mentioned as co-inventor. That is mostly just an ego-booster I suspect, as this was work-for-hire. From what I understand the patent application is quite narrowly defined, so hopefully I am still able to use my bag of LP tricks for other clients.

Posted by Erwin Kalvelagen at 12:48 PM No comments:

I have built several “dashboards”  in Excel (e.g. http://yetanothermathprogrammingconsultant.blogspot.com/2010/01/excel-reporting.html), but here is a different approach: use Powerpoint.

Posted by Erwin Kalvelagen at 10:36 AM No comments: 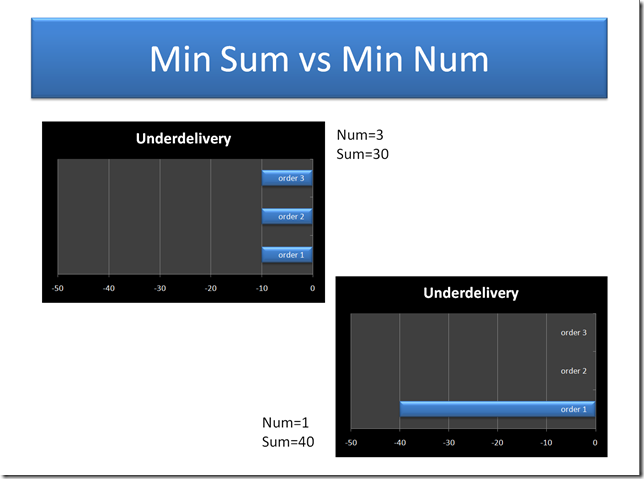 In practice, a good approach is to minimize a linear combination of both the SUM and the NUM objectives.

Posted by Erwin Kalvelagen at 6:49 PM No comments:

There is a fairly deep issue when comparing GDX files if one of the GDX files has the following properties:

The following illustrates the problem:

Apart from a small bug related to $ONEMPTY, it turns out that the way GDXDUMP exports equations records, it looses information about the equation type. This leads to the above results. Luckily in practice this will not be an issue, as equations are not often part of such an exercise.

During a course I taught about GAMS I was asked if it is possible to edit GDX files. The answer is: GDXDUMP will give you a GAMS representation of a GDX file which you can edit. Using the call:

you can make a new GDX file with the changes incorporated. The tool GDXDIFF will allow you to monitor the changes.

Although this is correct, I chose the INDUS89 example as illustration. That was unfortunate, as that failed because of the exotic Equation problem.

Posted by Erwin Kalvelagen at 5:17 PM No comments:

I was doing some reporting on the results of a large, complex MIP model. I made the unfortunate error of having some spurious blank cells. With the =SUM() function, skipping such cells is identical as considering them as zero, so there is no problem. With a =MIN() function however this is not the case. Even =MINA() will not help there:

It is sometimes good to work with different people on a project so that one of your collaborators can catch this before submitting results to the customer!

In this case the result was beneficial for us. With this, our estimated improvement in monthly revenue when using a MIP based model, increased from 250K euros to 300K euros.

Posted by Erwin Kalvelagen at 12:07 AM No comments:

This question came up during a workshop I taught at a large power company:

I want to generate a number of load-duration and price-duration curves, but it takes too long.

Here is a small example demonstrating some formulations for sorting a 1d parameter:

Posted by Erwin Kalvelagen at 12:06 AM No comments: