I am experimenting with a timber model. These models have typically long horizons, which can cause some problems with some solvers. As the model has a nonlinear objective I tried a few NLP solvers:

In some cases a new version of a solver can perform worse on some models. Here is a particular unfortunate example, where Cplex 12.1 finds several very good solutions in the initial heuristics, but Cplex 12.2 just fails to find any integer solutions within the allotted time:

Such behavior is always difficult to explain to a customer. The argument that on average a new version tends to do better is of little consolation.

PS. The time limit was very tight on this model: 400 seconds (extremely tight considering the LP takes 100 seconds). This was no problem with previous versions of Cplex as the initial heuristic always found solutions very quickly. These solutions were so good they already obeyed the requested gap of 0.8%. Cplex 12.2 finds the solution relatively quickly in the B&B after about 500 seconds on my machine with 1 thread (the client on his machine obtained no solution in 600 seconds with 2 threads and some other solver options; I assume a little bit more time may help here).

> My large QP portfolio model does not solve with GAMS/KNITRO.

Yes, for large problems you will get:

Memory estimate for Hessian is too small.
Increase the <modelname>.workfactor option from the current value of 1

Even if the model is formulated as a QCP model, the GAMS link is not smart enough in setting up the hessian efficiently. Instead it looks like the QP is handled as a general NLP.

There are two easy workarounds. First of all you can solve this with IPOPT. The GAMS link for IPOPT is smarter in dealing with second derivatives than the link for KNITRO (as of GAMS 23.5). Note that it is better to solve as a QCP model than as an NLP model: GAMS is not smart enough to recognize this as a QP and exploit that:

A second possibility is to reformulate model (1): 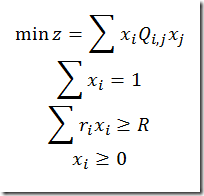 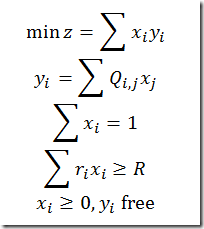 This formulation can be solved with KNITRO without the problems with the hessian storage.

We exploit here symmetry in the quadratic form x’Qx. This exercise substantially reduces the GAMS generation time, and also further shaves off some time from the solver:

We can also apply the triangular storage scheme to model (2). With a solver like SNOPT this leads to a very fast total solution time (i.e. generation time + solver time).

If needed we can even speed this up by not using the covariances but rather the mean adjusted returns directly: 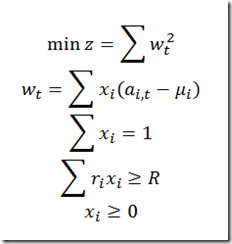 Even for the simple QP portfolio model, careful modeling can help to improve the performance in a significant way.

Posted by Erwin Kalvelagen at 1:29 AM 6 comments:

For some models the barrier algorithm is very fast compared to the Simplex method (for an example see http://yetanothermathprogrammingconsultant.blogspot.com/2009/01/cplex-barrier-results.html). Here is an example of a medium sized but quite dense problem (107543 rows, 81160 columns, 878481 nonzeroes), for which the opposite holds. The primal and dual simplex method of the leading solvers are all doing very good, and the interior point algorithms have some troubles. In addition the variability between interior point timings is much more pronounced than the variability between Simplex times.

Timings are in seconds. The fastest barrier is 306 secs.

It is interesting to see how Gurobi recovers from numerical trouble in a difficult (dense) LP, when using the primal simplex algorithm:

Apparently it switches to quadruple precision. Those are REAL*16 numbers, yielding approx. 34 decimal digits of precision. I don’t think I have ever seen this capability in other solvers.

The details are very much problem dependent, but

can be formulated as

Posted by Erwin Kalvelagen at 11:44 PM No comments:

One simple alternative is:

No doubt this will be fixed in the next release.

Posted by Erwin Kalvelagen at 8:40 AM 2 comments: