Reading this presentation http://ice.uchicago.edu/2009_presentations/Skrainka_OptHessians.pdf I am missing one of the most valuable tools in NLP modeling: setting appropriate bounds. In my opinion (and experience) in NLP modeling there are three areas of attention when the model fails to yield an optimal solution:

Fixing these will help most ill-behaved models. These points are somewhat interrelated: a good bound may prevent the solver go into an area with scaling issues and a good bound also can change the initial point. Bounds are a very important tool in NLP modeling and should never be just ignored.

Posted by Erwin Kalvelagen at 7:20 PM No comments:

In GAMS models I often see $load being used to read data from a GDX file where $loaddc is more appropriate. Here is why.

GAMS has the concept of domain checking (like type checking in programming languages). E.g. when we do

This fragment has a problem: the key for New York is not identical. So GAMS will issue an error message

Now we do the same with a GDX file, and $load:

When we run this fragment, we don’t see any error or warning! Of course the data is wrong: the population of New York is not read and is kept at its default value of zero. The display shows:

The $load is just too unreliable to be used for anything that is larger than can be inspected by eye-balling. Compared to an old-fashioned include file it is really a step back.

A fixed version of $load was introduced later and is called $loaddc:

This will enforce domain checking:

In general $load’s should not be used. In some rare special cases a $load can be used to select from a larger data set, but then you should add extra checks to prevent a situation as described here to slip through without error.

Posted by Erwin Kalvelagen at 1:18 PM No comments:

Earlier this week I was sitting next to an experienced GAMS modeler working together on a model, but I was nevertheless able to show him some tricks:
Note: a bug in GAMS may introduce a symbol SameAs in the gdx file. This is largely a harmless bug.
Posted by Erwin Kalvelagen at 6:00 PM No comments:

Many newer languages allow for declarations almost anywhere. In a large GAMS model I had a case like this:

Inside the include file I needed a local set so I could simplify some expressions. I can not place the set declaration there, but am forced to move it far, far away outside the loop. For small models this is not a big problem, but for very large models it would be beneficial to allow declarations inside loops so we can declare symbols close to where they are used.

Posted by Erwin Kalvelagen at 8:11 PM No comments:

If there are more than a dozen or so it becomes cumbersome to find and select the correct tab.

A useful alternative is to use hyperlinks for easy navigation. It may make sense to introduce a “table of contents” page, e.g.: 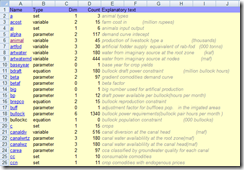 Then in every sheet make sure it is easy to go back, e.g. by adding a link to the TOC page: 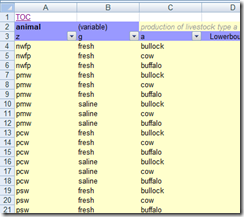 This now offers a completely alternative way of navigation in addition to using the sheet tabs. The above example spreadsheet is here.

Posted by Erwin Kalvelagen at 3:11 PM No comments:

In GAMS models I often see loops where they are not really needed. E.g.

can be written as:

The timing for the direct assignment to p(i,j,k) is 0.78 seconds. The time to populate q(i,j,k) is 18 seconds. The slightly different loop to fill q2 takes the same time: also 18 seconds. The difference is merely syntax. So if possible try not to use loops: not only is the code more compact, but it also performs better.

Posted by Erwin Kalvelagen at 1:30 AM 2 comments:

GAMS: writing to a GDX file from different spots

For a large GAMS model I need to write to a GDX file from different places in the model. At compile time this can be done in some cases, e.g.:

However compile-time gdx writing is only useful in exceptional cases. At execution time we are not allowed to append to a gdx file. The code:

will cause x.gdx only to contain symbol b.

Unfortunately there is no good alternative for me:

Posted by Erwin Kalvelagen at 11:29 PM No comments:

From the limited documentation it is not clear but $onechoS is 100% identical to $onecho. So no need to ever use $onechoS: in my opinion (well actually experience) it will just cause confusion.

Posted by Erwin Kalvelagen at 4:43 PM No comments:

We're looking to write a GAMS parameter that generates a series of random normal numbers with a user-chosen mean and user-chosen variance. But here's the twist: We need this generated series of numbers to have a user-chosen auto-correlation from one observation to the next. So if one number in the sequence exceeds the mean, we need the next one to be above it, too.
We're actually thinking of streamflows from one month or year to the next.  We know the flows' means and variances but also know their autocorrelation. Do you know of any kind of GAMS function that could generate this kind of parameter.  Possibly you could give us tips on how to write this function in GAMS?

I suspect you want to simulate an AR(1) process here. I.e.

where ε(t) is normally distributed with mean 0 and variance σe2.

Now we have the following:

So given (μ,σ2,ρ) we can calculate

Now we can simulate X(t). In the hope that I did all the math correctly, we can now do in GAMS:

You may want to throw x(i) into a statistics package and see if it really behaves as you want.

Note: Instead of the warm-up loop, we could also start with a first observation from N(μ,σ2). 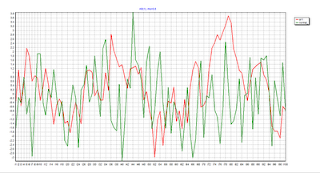 (Compare normal with AR1/rho=0.8: the AR(1) series stays positive or negative longer)
Posted by Erwin Kalvelagen at 3:49 AM No comments: