I see a lot of GAMS models. Some of them are really beautifully done. Others, I would like to suggest some edits. Here we compare two different models that solve a Kakuro puzzle. The problem from (1) is here: 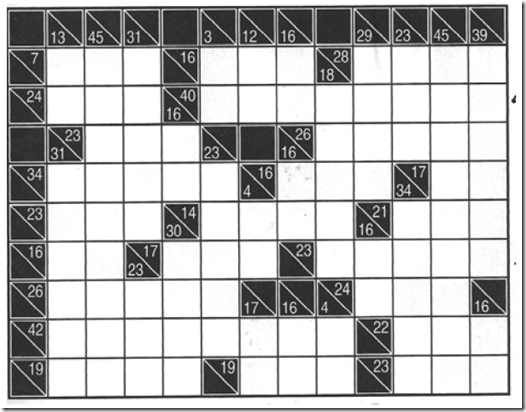 We need to fill in the white cells with numbers \(1,…,9\). Each horizontal or vertical region of consecutive white cells has to add up to the number in the black cell just above to to the left. Furthermore each number in each region has to be unique. The solution of the above puzzle is (again from (1)): 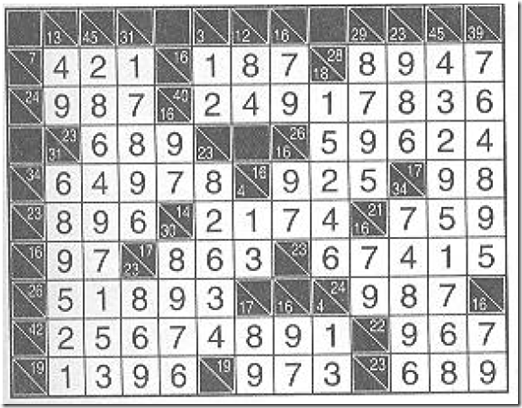 We have the following two models:

In the following I try to show things next to each other: MODEL A (1) at the left and MODEL B (2) to the right.

The differences between the models vary between mundane syntax or style issues, and more substantial differences in the underlying optimization model. In some cases I do things differently because of taste and customs, in others I may have a good reason to write things down differently.

The blocks or segments have a different numbering scheme. In model A we number them as follows: 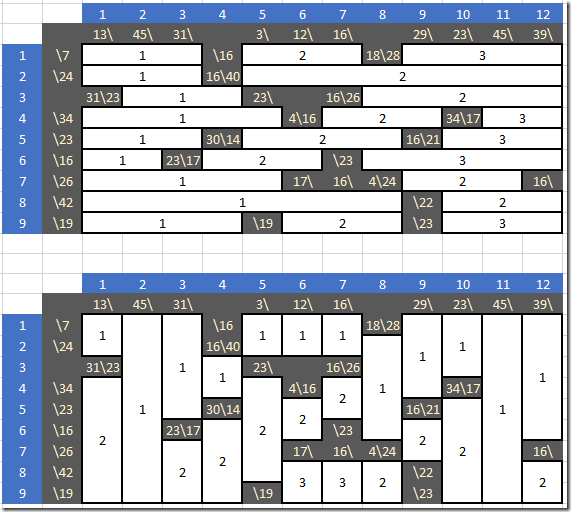 The maximum number of segments in a row or column is three, which explains the set seg in model A.

In model B the numbering scheme is global: 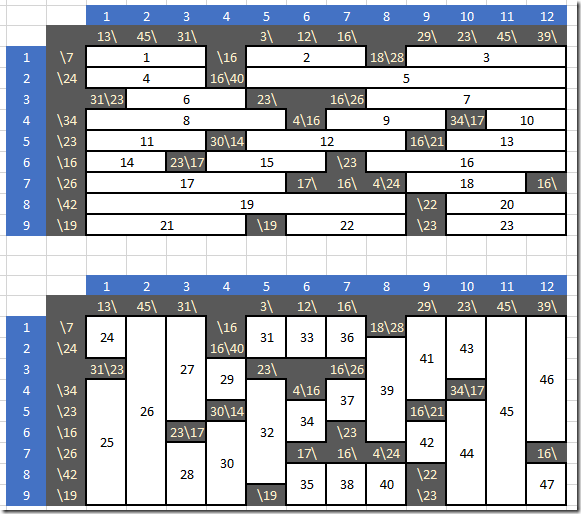 Here we have 47 different blocks. Somehow model A calls regions “segments” and in model B they are called “blocks”.

I tend to keep variables together and put them after data entry and data manipulation. You will see the variable declarations in model B further down.

The data structures in model A indicate the number of segments in each row (and column), their starting and end-position and the required summation value. This gives rise to eight different parameters.

The left model A has a lot of individual assignment statements. That is not the most compact way to initialize data. GAMS has parameter initialization syntax for this. E.g. we could have written the initialization of n_segs_l as:

The right model B has just one parameter block that has all the needed information. This approach has just one mapping between block number \(k\) and a bunch of cells with coordinates \((i,j)\) and also has the summation value. In the derived data we extract data in a form that is easier to use in the rest of the model.

This looks like a somewhat unusual approach. I will discuss this further down at the spot where these equations are defined.

Remember that Model A had binary variable a_bin(i,j,v) declared earlier. Model B has an extra variable \(v\) which will help us keeping the equations simpler and also to reduce the number of non-zero elements in the LP matrix \(A\).

The naming of identifiers (names of sets, parameters, variables and equations) is somewhat a matter of taste. Admittedly, \(x\) is not the most self-descriptive name, but I like it if there is a single central variable that really plays a dominating role the model. Often I like to use a naming scheme where I use very short names for identifiers that are used a lot, and longer, more descriptive names for identifiers less often used in the model. That would imply, my equation names are longer:

The equations are defined below:

Model A has a complex equation, because it tries to find all line segments in a row \(i\). In Model B we have a much simpler equation that is actually more powerful: it handles both the row and column blocks in one swoop. I like to make the equations as simple as possible as equations are more difficult to debug. The set sblock helps us to simplify this constraint. By definition sblock only refers to white cells.


On the left we have again a very complicated equation for the row segments. On the right we split the logic in two parts: the first equation calculates the integer value \(v_{i,j}\) of a cell \((i,j)\). The second equation sums up the values in a block \(b\) and make sure this sum has the correct value. This equation handles both row-wise blocks and column-wise blocks. Note again that we only operate on the white cells.

Each white cell \((i,j)\) is part of two blocks (row and column). By introducing an intermediate variable \(v_{i,j}\) I prevent duplication of the expression \(\sum_k k\cdot x_{i,j,k}\). This formulation makes the model larger but sparser.

Here the model A introduces a lot of equations to force the “black” cells to zero.

First, this is not my preferred way to do this. We can make a subset black(i,j) (containing the coordinates of all black cells) and then just say:

Of course we can do this more compactly by setting bounds instead of using a full-blown equation:

Even better is just not generate any variable with \((i,j)\) outside the white cells. In model B we have created a convenient set for that: \(IJ(i,j)\): this subset has only the “white” cells. I make sure all equations only operate on the white cells and never touch the black cells. This requires a little bit more thought and discipline but I prefer this approach.

In model B we handled these constraints already as we dealt with row and column-wise blocks in one single constraint.

On the left we have a real objective to prevent zeroes in the white cells. Probably we should add

to force the MIP solver to find the global optimum with a gap of zero. Note that MODEL B does not need any optcr as we only look for a feasible integer solution.

The display of a_bin.l is not very convenient to view. It looks like: 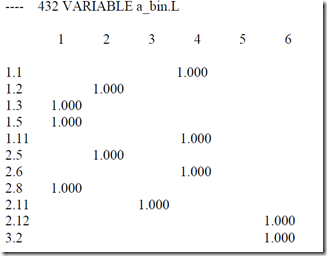 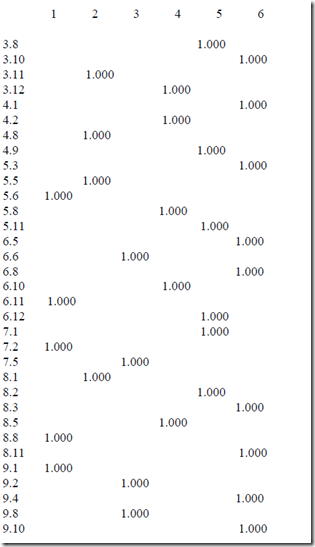 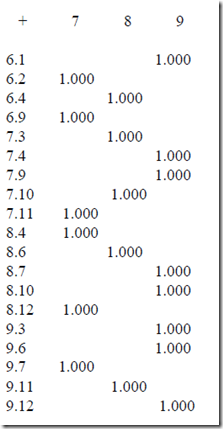 A better display can be achieved by:

That would lead to a similar output as produced by model on the right:

The final question is: how do these models perform? I ran the problem with the open source solver CBC (1 thread):

As expected a MIP solver prefers the tighter formulation of MODEL B.

Posted by Erwin Kalvelagen at 4:21 AM No comments:

Example with Transportation Model from (1) taken from the optlang docs:

Some other Python based options are Pulp, Pyomo and PyMathprog (2).

Posted by Erwin Kalvelagen at 3:35 PM No comments:

Multiplication of binary with continuous variable between zero and one

where \(\text{NB}\) means non-binding by which I mean we can ignore this constraint.

Posted by Erwin Kalvelagen at 2:05 PM No comments:

Solving Kakuro puzzles as a MIP

The Kakuro puzzle is another logical puzzle similar to Sudoku, KenKen and Takuzu. A small example from (1) is:

The rules are as follows:

The actual model is rather simple. Similar to (2) and (3) I define a binary decision variable:

where \(IJ(i,j)\) is the set of white cells we need to fill in. To make the model simpler we also define an integer variable \(v_{i,j}\) with the actual value:

The values in each block need to add up the given constant. So:

where the set \(B(b,i,j)\) is the mapping between block number and cells \((i,j)\). The uniqueness constraint is not very difficult at all:

Note that (1) uses a different numbering scheme for the cells, but otherwise the models are very similar. My version of the model is smaller in terms of nonzero elements in the matrix, due to my use of intermediate variables \(v_{i,j}\).

A compact way to enter the data for the example problem in GAMS is:

After adding a dummy objective, we can solve the model as a MIP (Mixed Integer Programming) Model. The output looks like:

It is noted that although I used the declaration \(x_{i,j}\), only the subset of cells that we actually need to fill in is used in the equations. GAMS will only actually generate the variables that appear in the equations, so all the “black” cells are not part of the model.

Cplex can solve the model in zero iterations and zero nodes: it solves the model completely in the presolve.

Interestingly in (1) somewhat disappointing performance results are reported. They use CBC and a solver called eplex (never heard of that one). I checked the above small instance with CBC and it can solve it in zero nodes, just like Cplex.

This example is taken from (4): 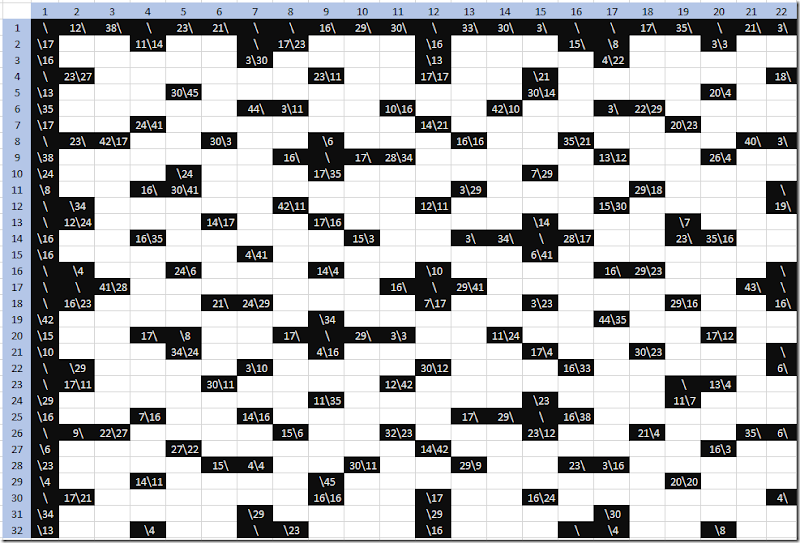 To be complete, CBC takes a little more time:

This model does not solve completely in the presolve. However the computation times look quite good to me, especially when compared to what is reported in (1). 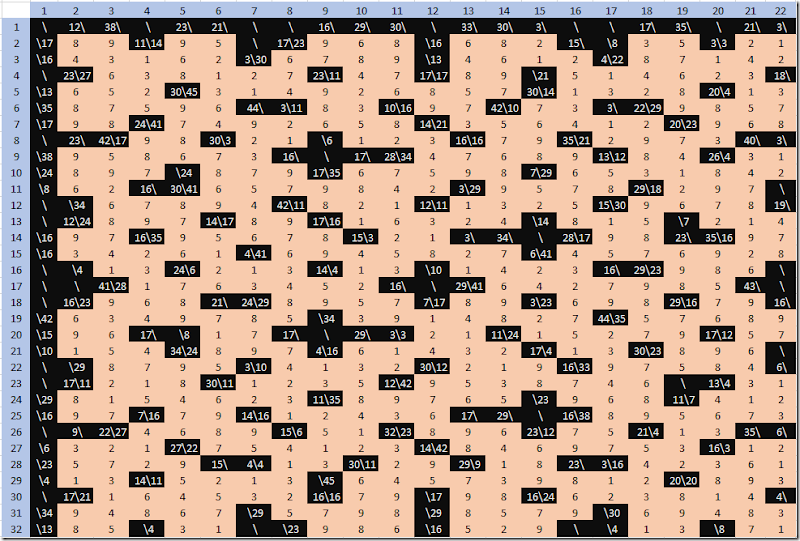 We can prove the uniqueness of this solution by adding the constraint:

Posted by Erwin Kalvelagen at 4:56 PM No comments: