I spent a large amount of time wasting my eyes while staring at solver progress logs. Sometimes they provide some surprises:

Looks like the preprocessor is making this problem much more difficult!

For another example of a Cplex log puzzle see: http://yetanothermathprogrammingconsultant.blogspot.com/2009/01/cplex-log-number-of-integer-variables.html.

In general as LP/MIP solvers become more sophisticated often their logs become more unfathomable. E.g. back in the old days when primal Simplex LP solvers, the sum of infeasibilities and the objective were good indicators of progress. Nowadays with dual simplex being the default algorithm, numbers just go up and down. With the MIP log, the columns I pay attention to most are lower- and upper-bound and the gap.

The model has many binary variables that are automatically integer. Basically:

I have the feeling that the Cplex presolver makes both integer.

When using aggind=0 I see almost the same:

(The number of generals is still increasing). It is somewhat difficult to say (the performance of Cplex – and probably other MIP solvers – is a little bit erratic on this model) but it seems that doubling the number of integer variable does not have a major effect.

This can be reformulated into something more manageable, by actually adding constraints and variables:

Although we add extra rows and columns, the sparsity of the model and the “nonlinearity” (in terms of nonlinear nonzeros and in terms of nonlinear code size) will improve a lot. In this case the first formulation could not be solved by hitting memory limits, and the second version solved fine.

Obviously repeating expressions also happen in LP’s (and MIP’s). Also there they can cause problems (extra memory and poor performance), as they are in many cases not automatically removed by presolvers. When using sparse solvers, the number of nonzero elements is a better measure of problem size than the number of rows or columns, so adding a few rows/columns but saving a lot of nonzero elements is often a good trade-off. In the above case we add card(R) rows and columns but save up to [card(S)-1]*card(S) nonzeroes. In the above model we save nonlinear nonzeroes, which makes the trade-off even more worthwhile.

It would be great if a modeling system would recognize the fact that the same subexpressions are used over and over again, and give appropriate feedback to the user. I suspect this is not an easy task however. In compilers we sometimes see “common subexpression elimination”; this is a related issue.

Posted by Erwin Kalvelagen at 6:45 PM No comments: 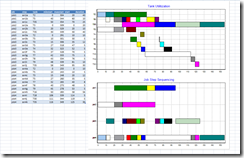 These are two instances (related to http://yetanothermathprogrammingconsultant.blogspot.com/2010/07/multiple-length-cutting-stock-problem.html) of very small MIP models that are very tough to solve to optimality. Size is very small: 26 rows and 73 columns. The first data set solves slowly, but the second one is really tough even for the best MIP solvers (at least with default settings).

Usually models of this size solve very quickly, but with MIP’s one should always be prepared for surprises.

Workaround: just stop after a little while: the obj is most likely optimal just not proven optimal. This behavior is not unusual: the mip solvers have good heuristics so they actually find the (near) optimal solution very quickly. But proving optimality by working on the best bound is not that easy and turns out to be very expensive. A second approach would be to use the alternative formulation mentioned in http://yetanothermathprogrammingconsultant.blogspot.com/2010/07/multiple-length-cutting-stock-problem.html.

To prove optimality it makes sense to use an option like MipEmphasis (Cplex) or MipFocus (Gurobi) to move the best bound. Dataset 1 then solves quite quickly but dataset 2 is still terrible.

Posted by Erwin Kalvelagen at 8:12 PM No comments:

In Windows there are many ways to describe the same file: UNC, old 8.3 notation, relative, absolute. Unfortunately it is not trivial to detect whether two filenames are pointing to the same file. Here is some code that does this: http://blogs.msdn.com/b/vbteam/archive/2008/09/22/to-compare-two-filenames-lucian-wischik.aspx.

Posted by Erwin Kalvelagen at 2:19 AM No comments:

In http://yetanothermathprogrammingconsultant.blogspot.com/2010/07/multiple-length-cutting-stock-problem.html an extension of the standard cutting stock model is discussed. A question was posed if it would be difficult to add some availability restriction to this model. I.e. example data can look like:

This can be implemented as follows. Our notation is again:

Then the master problem in the column generation approach can look like:

where we have the following constants:

The subproblem can be formulated as: 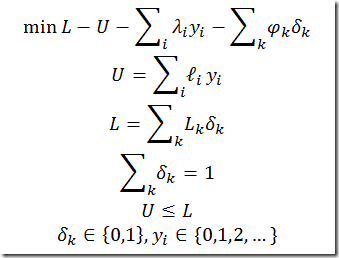 The initialization of the algorithm needs a little bit more sophistication than I had before, to make sure a feasible initial solution is created. Alternatively it may be more convenient to make the master elastic with respect to the availability constraint, so that it is easier to construct a feasible solution.

Posted by Erwin Kalvelagen at 3:52 AM 5 comments:

While playing with my old column generation example http://www.amsterdamoptimization.com/pdf/colgen.pdf I wanted to change the display of of the patterns a little bit:

Now I wanted to drop the zero’s after the decimal point, so I did:

This gave as result:

It is not clear what the stars are doing there. May be some debugging output left in the code.

Posted by Erwin Kalvelagen at 5:50 PM No comments:

I received some test data to run against a cutting stock model (see http://yetanothermathprogrammingconsultant.blogspot.com/2009/09/vstosolver-foundation.html). The data approximately looks like:

This cannot be solved using the standard model mentioned here and in http://www.amsterdamoptimization.com/pdf/colgen.pdf. The standard model assumes there is just one raw material length, and we have here a number of different lengths in stock. Note that we assume that stock availability is not a limiting factor. The question was: can we adapt the column generation approach to handle this.
The first document I found with google was this: http://www.aimms.com/aimms/download/manuals/aimms3om_cuttingstock.pdf. At first reading this did not look very promising for different reasons. First they use as objective in the multiple length version: minimize the cost of each stock length. I don’t have this data available, and we are aiming to minimize waste.  Note that in the standard cutting stock problem we can simply use the number of rolls of raw material as proxy to find the minimum waste. In this case this is not a good objective and we really need to model the wasted material explicitly.
A second problem was the simple way they dealt with the multiple lengths in the sub problem. They just run the subproblem several times:

In our case we have a somewhat large set of stock lengths, so that is not attractive. It was argued one could stop as soon as a good candidate was found. (Note: There is some confusion about what the sub and the master is as they use the term submodel for what usually is called the master problem.)
I believe there is a more elegant way to do this: let the pattern generation model (this is usually called the subproblem) find a candidate pattern and a candidate raw material length directly. A similar approach is written up here.
So with the notation:

and we can form a master problem as follows:

Note that I used an equality constraint here. That is to make sure we don’t produce more products with zero waste than needed. The subproblem can now look like: 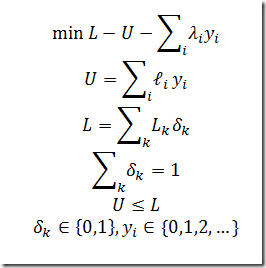 Here lambda are the duals of the master problem. So the subproblem both finds a new pattern y(i) and which stock length k is to be used for this pattern. This actually solved the problem quickly (approx 10 seconds). A further improvement was added by preprocessing the data. If a demand length is equal to a stock length, we can immediately choose that stock length, and remove this demand from the model. If the problem is larger, it may be wise to add a tolerance, i.e. if a demanded length is within say 5% of a stock length, use that stock length.
It is interesting to see that the column generation algorithm actually is not that sensitive to the preprocessing step: 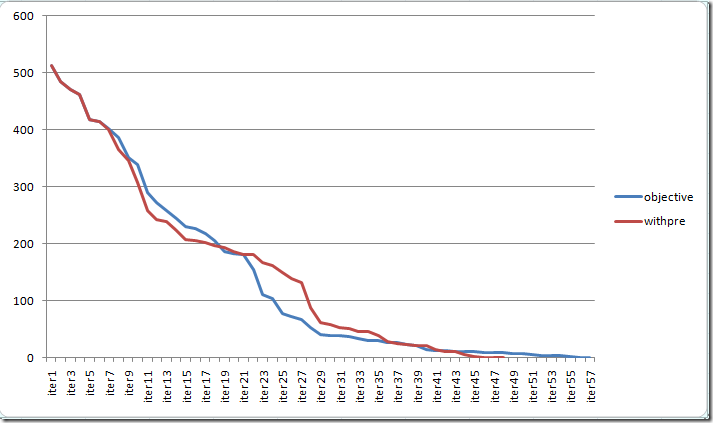 We stop a little bit earlier with preprocessing, but the expected better performance is not uniformly over the whole run. It is noted I used a simple minded assignment for the initial solution. Probably a simple bin-packing heuristic to find an initial solution can help to start the column generation algorithm with a better objective.
An alternative formulation would be: use inequality constraint in the master together with a cost coefficient of c(p)=L(k(p)). The subproblem needs to be updated slightly: drop U from the objective. This formulation gave similar results.

Posted by Erwin Kalvelagen at 1:16 AM 6 comments: