In the tool GDX2SQLITE we export a GAMS GDX file to a SQLite database file.

The –small option mimics how GAMS stores data internally. All strings (called UELs or Unique Elements) are stored in a pool and all sets, parameters, variables and equations use index numbers for that pool.

To find out how such a pool looks like, you can do

The same storage mechanism is used in GDX files: the strings are stored separately.

When we convert a GDX file to a SQLite database there is an option to use the same storage structure. With SQL we can hide the details behind a VIEW: a “virtual” table that is computed on the fly from an underlying SQL SELECT statement.

Here is the mechanism: 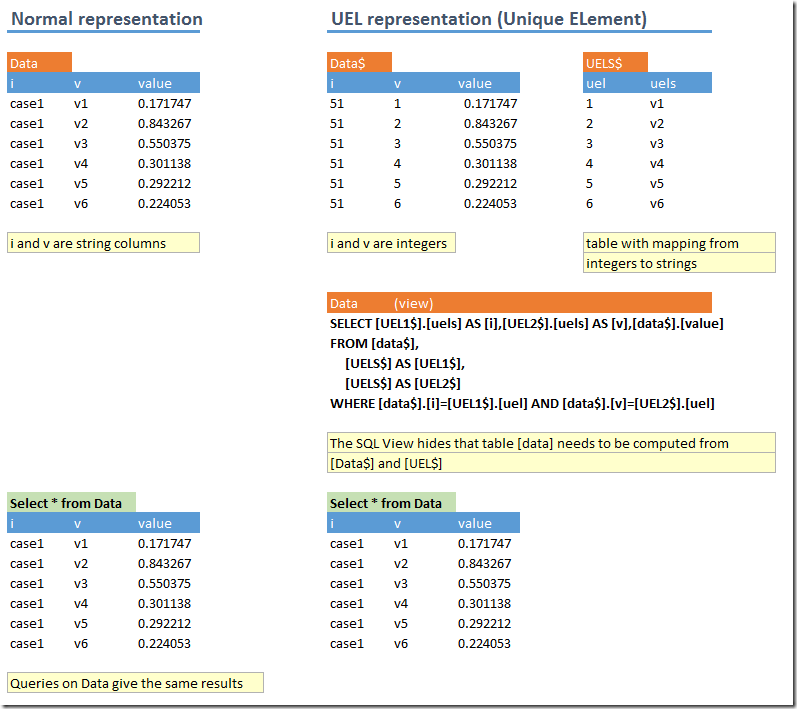 In the picture above, only the first 6 rows of each table are shown. In reality the tables have a significant number of rows.

In practical models and data sets the number of UELS (ie the size of the string pool) is small (often surprisingly small) compared to the total number of rows in the data tables. The advantage of this storage scheme is that the database files are smaller.

Indeed here we have some statistics:

Artificial data often has a larger number of UELs than real world data, as is illustrated here (data.gdx is a synthetic data set while WaterCropData is from a real model).

Posted by Erwin Kalvelagen at 4:43 PM No comments: 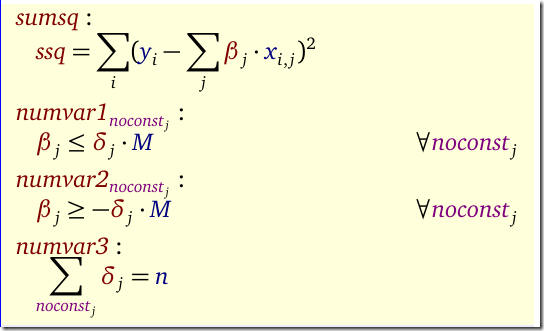 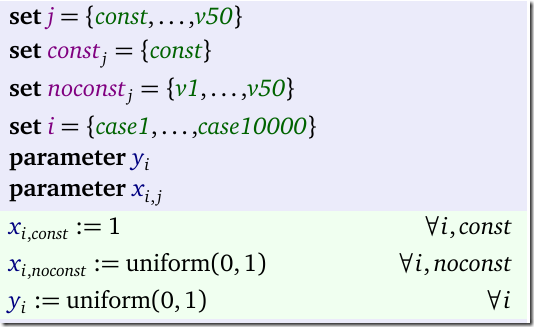 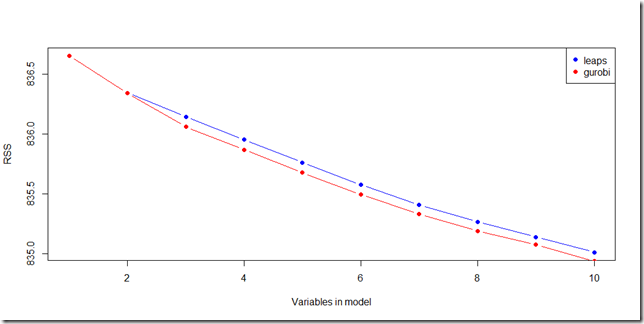 Posted by Erwin Kalvelagen at 12:13 AM No comments:

In http://yetanothermathprogrammingconsultant.blogspot.nl/2015/02/logistic-regression.html we implemented a simple maximum likelihood problem which replicates the results from R on a medium size data set (n=400 cases). The question is of course: why can’t we use some least squares objective. The answer is: this problem turns out to be a non-convex problem and thus we may get into trouble. 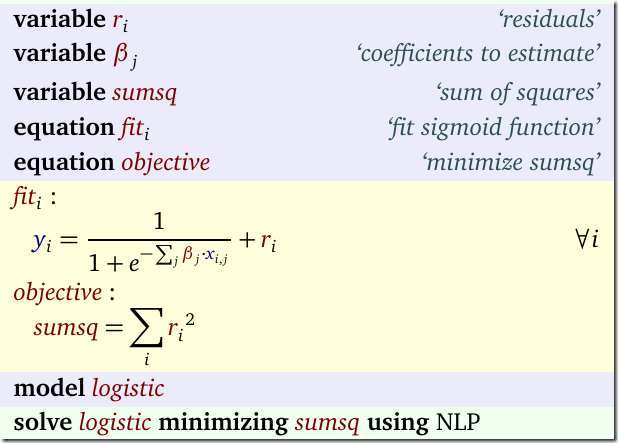 Of course if you like, we can substitute out the r’s and obtain an unconstrained problem. Note that x and y are data.

Some solvers can solve this, but others have some issues:

Indeed the maximum likelihood version of the model seems easier to solve.

Posted by Erwin Kalvelagen at 12:26 PM No comments:

It is sometimes a bit confusing to find out which ODBC drivers are installed (especially when we need to know precisely which drivers are 32bit or 64bit). This script when run from a 64 bit GAMS version will list all 32 bit and 64 bit drivers:

Posted by Erwin Kalvelagen at 7:41 AM No comments:

The Google PageRank algorithm is a well known algorithm to calculate web page rankings in a search engine. It is surprisingly simple (for smaller data sets). The basic update equation for the page rank estimate v looks like:

We iterate this thing until the v’s converged. Note that in GAMS this is a parallel assignment so we don’t need to worry about v’s being overwritten during the assignment (otherwise we could have used vprev in the right-hand side expression, see further below). To test this we first load the (sparse) matrix and calculate the degree of each node: 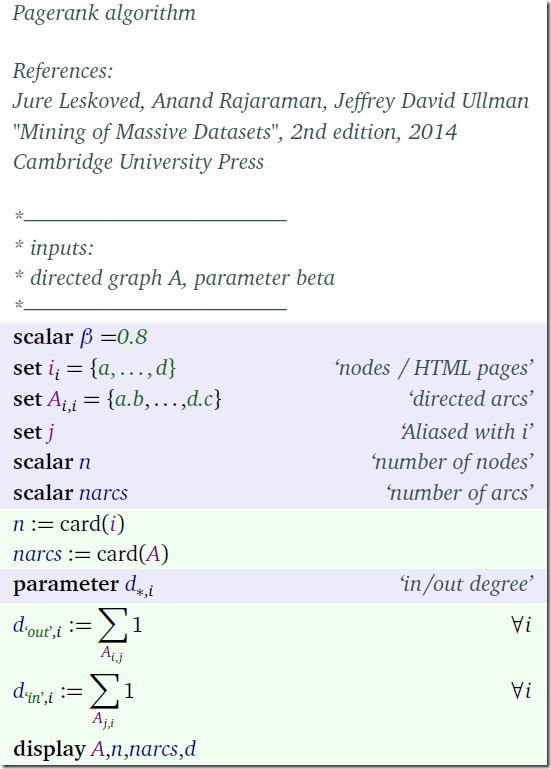 The actual algorithm should perform quite reasonable in GAMS as we can exploit the sparse execution of the matrix-vector multiplication inside the loop. Note that the transition matrix M is transposed wrt A. The loop terminates as soon as the update does not change v anymore. 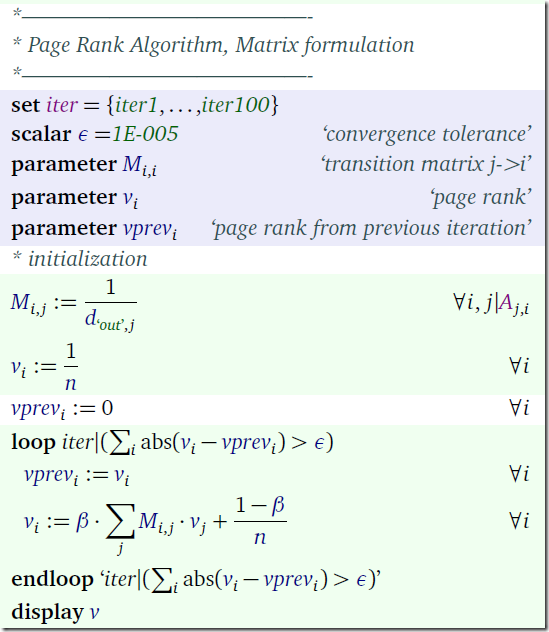 Indeed I was able to run this model quickly even with the harvard500 data set (http://www.mathworks.com/moler/exm/chapters/pagerank.pdf). For this 500 node web graph the loop takes about 0.5 seconds.

The detail about the parallel assignment can be illustrated with: There is no solve in the GAMS code, so Matlab should do very well on this also. In Matlab we can even compare dense vs sparse execution (GAMS always uses sparse storage).

We can see Matlab is doing much better on the matrix-vector products especially when using a sparse matrix M. The difference between sparse and dense should increase for larger matrices: 500x500 is actually not that big and works quite well with dense linear algebra. The density of the M matrix is 1% in this example and should be smaller for larger matrices. Matlab is very fast as long as we can use the computational kernels efficiently, which is the case here.

Here we show the complete model. As it turns out the loop looks quite similar, but some of the initialization code is really different between GAMS and Matlab. Matlab is of course much closer to real mathematical notation than GAMS. I am not sure this always helps in making code more readable. This small example actually shows this succinctly.

The convergence of the term sum(abs(v-vprev)) is interesting. We plot here against the iteration number: 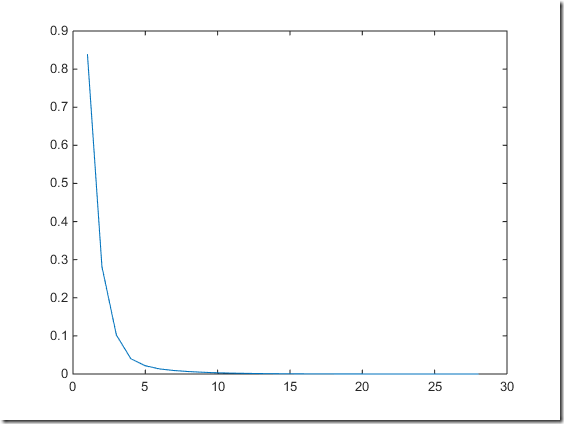 With a logarithmic scale: 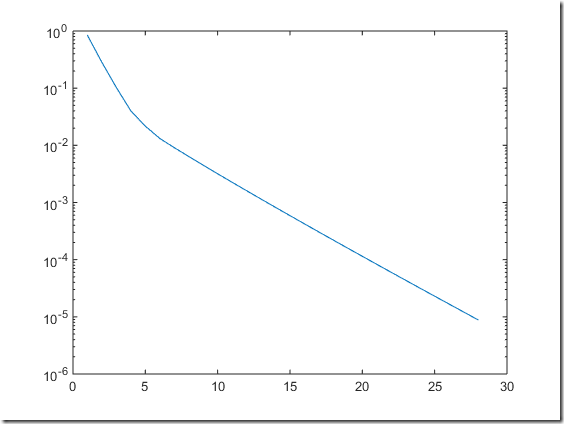 Posted by Erwin Kalvelagen at 9:48 AM 2 comments: 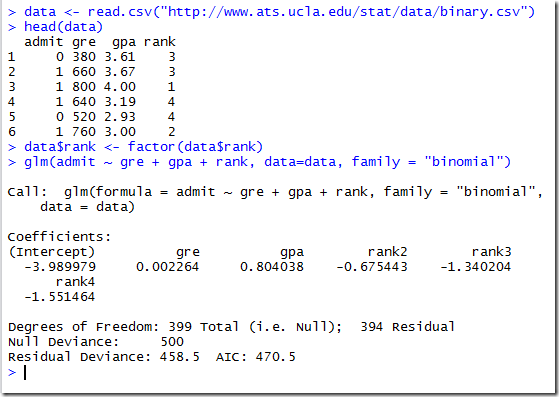 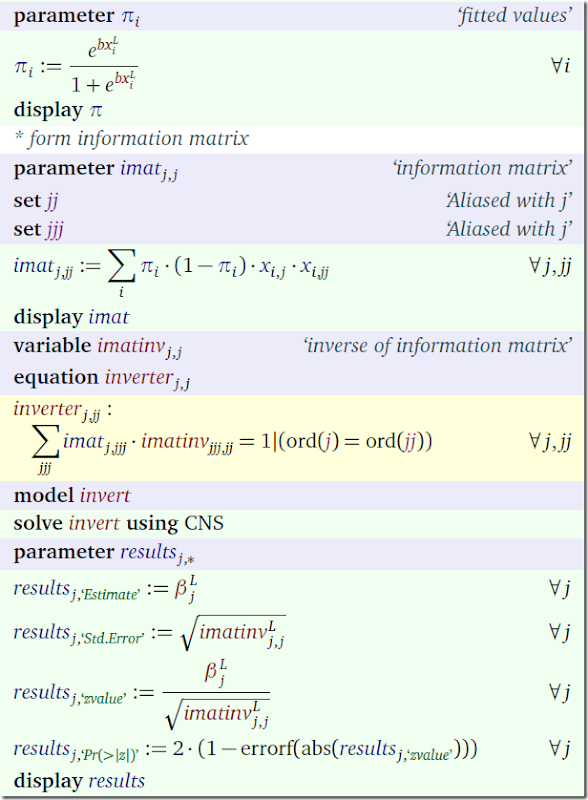 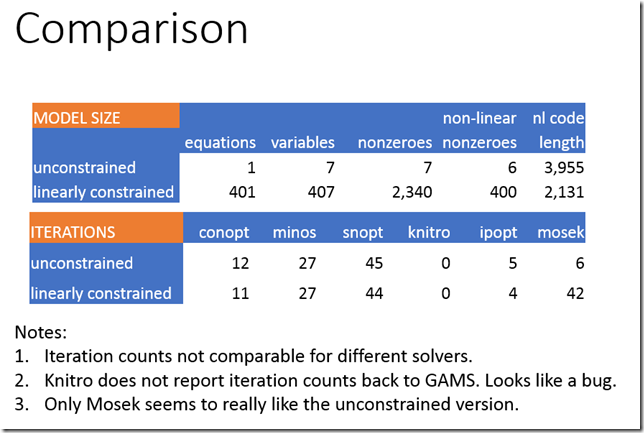 Posted by Erwin Kalvelagen at 11:18 AM No comments: