For a large LP model a customer of mine wanted to have instead of a V shaped penalty around a goal, something that approximates a U shaped penalty. With standard slacks:

we essentially have a V shaped penalty: 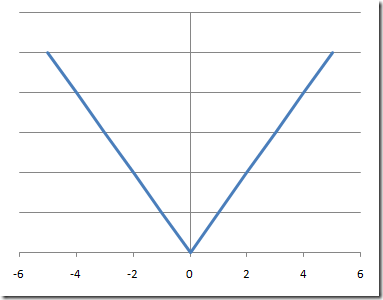 We can approximate a more U shaped form by introducing extra slacks with a smaller penalty: 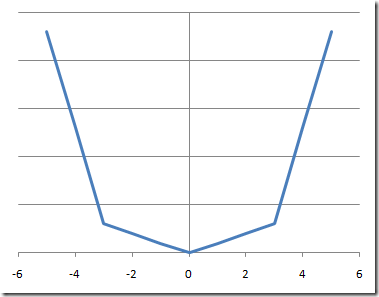 The idea is that the algorithm will select the cheap slacks t first, before spending on the expensive slacks s. This will keep the LP linear and we don’t need extra binary variables. For q=0 we essentially allow small deviations for free, but start paying when we go beyond the threshold T.

This approach can easily be extended to more piecewise linear segments (as long as we keep things convex). Also the range T for the slacks t may be generalized to:

Posted by Erwin Kalvelagen at 6:41 AM 3 comments:

When demoing http://www.sacmeq.org/statplanet/StatPlanet.html (for which I developed a GAMS link), I reminded to Hans Rosling. Check here for some fantastic presentations: http://www.gapminder.org/videos/. The software has been acquired by Google. Here is an example:

Posted by Erwin Kalvelagen at 1:05 AM No comments:

Posted by Erwin Kalvelagen at 11:57 PM No comments:

For a project I am considering a fairly large GAMS models where we want end-users to run certain scenarios. Of course there must be HTML GUI to allow the user to specify the input for each scenario to run. That is fairly standard stuff – once you know what type of parameters you want to expose to the user to change. The bigger issue is that the model is too large to run immediately if the user presses the Submit button. Rather we need to create a small queueing mechanism where jobs are waiting to run. After the model has been solved the user can inspect the results.
Running background jobs from a web-server environment is a little bit more exotic, although other examples exist (see e.g. NEOS and this effort). For this project we use a Windows IIS web server with PHP.

A background solve process can look like:
We run this thing after every INSERT in the job table.
Actually we can have several of those processes if the server is beefy enough to allow for parallel solution of different models. This does not only depends on the number of cores available but also memory considerations play a role. Essentially line 1 becomes:

Posted by Erwin Kalvelagen at 11:05 PM No comments:

Speed of loops in GAMS

In general loops are slow in GAMS. See http://yetanothermathprogrammingconsultant.blogspot.com/2009/08/gams-speed-of-loops.html. There are some exceptions however. Here is an example: 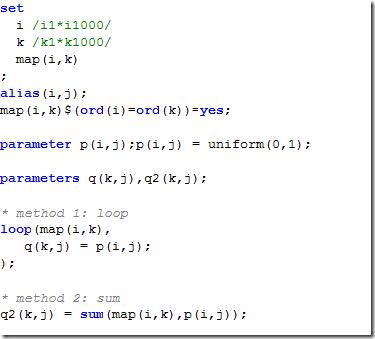 Note that map(i,k) has a diagonal structure.

Posted by Erwin Kalvelagen at 2:23 AM No comments:

Savepoint/loadpoint is an easy way to use an initial point for an NLP or advanced basis for an LP. The commands are:

The first time you run this the solution is saved in the GDX file. The next time around, this GDX is used to set as many levels and marginals that can be matched by name. For this very large MCP model it turned out to be useful to bring down solution times of related experiments.

Sorry for the ugly syntax. I would have preferred something more symmetric for reading and writing.

Posted by Erwin Kalvelagen at 9:53 PM No comments:

In short, I'm student and wish not to receive "ask your supervisor" answer.

Is there a function, like the error function, to compute the probability of random variable that has a beta distribution? if not, is there any way to statistically represent a bounded variable?

Thanks for you consideration,

This is probably related to http://yetanothermathprogrammingconsultant.blogspot.com/2010/09/student-mails.html. My hint in this case was: See http://www.amsterdamoptimization.com/pdf/specfun.pdf.

Posted by Erwin Kalvelagen at 9:27 AM 2 comments:

After spending time and effort on a model, it may well be worth to pay attention to presentation and dissemination of the model results. Currently I am working on a project where we can export results for a very large and complex GAMS model to an Adobe Flash application called StatPlanet. Obviously a web-based tool to inspect results has lots of advantages (nothing to install, available from everywhere).

Posted by Erwin Kalvelagen at 10:48 AM No comments:

GAMS has a binary data file format for which an API is available. In the last few weeks I encountered a number of similar issues with this in different projects.
The interface does require more knowledge of the internals of GAMS than most people have. An example is here. When we want to read a GAMS parameter A(I,J) into a C/Fortran/Delphi matrix A[1..m,1..n] we see this is not completely trivial. The basic obstacle is that GAMS has strings as indices, while most programming languages have simple integers as indices. I.e. we need to map J = /new-york, chicago, topeka/ into j=1..3. For large problems that means some kind of hashing or other way to quickly look up strings. There is also a “raw” mode interface that does not give strings but rather internal GAMS numbers. So we need to map J = /1001,1002,1005/ to j=1..3. This again is not a completely trivial task. If you are familiar with the internals of GAMS one can know that GAMS internal numbers (so-called UEL numbers) are by definition increasing. So one could use a binary search to quickly find numbers. A fortran routine for this can look like: 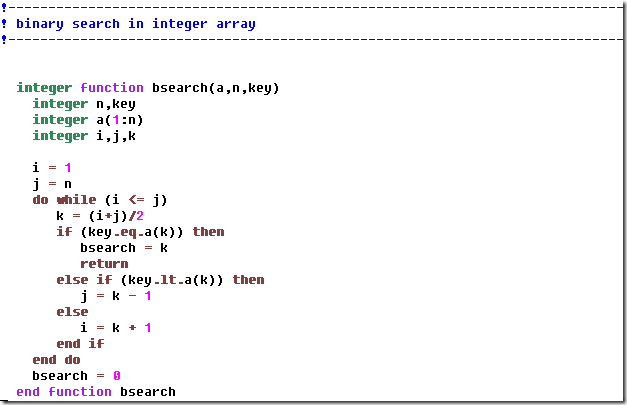 Another possibility would by to have an array of the size of MAXUEL that has mapping information from UEL-> j=1..3. That requires more space but has quick look up. If the GDX file contains only one set, one could use socalled “mapped” mode, but that cannot be used in general.

It is also worth noting that GAMS only stores and exports nonzero elements. So we cannot assume all A(i,j)’s are in the GDX file.

So to recap, my suggested approach to read a matrix A(i,j) from a GDX file is:

If you don’t want to use binary search an alternative algorithm would be:


GAMS users routinely generate very large GDX files with millions of records. To get data in and out of these files efficiently still requires substantial skills and effort.
Posted by Erwin Kalvelagen at 10:48 PM No comments:

For a very large large MCP model (a system of nonlinear equations with complementarity conditions) we observed it became unsolvable, even with a very good starting point. The reason was that the model was kept as small as possible in terms of equations and variables. As a result the model was much more dense and nonlinear (in terms of nonlinear nonzero elements) than needed. Basically, modeling systems and solvers that exploit sparsity should be fed large, sparse models instead of corresponding smaller, denser models. After substituting out some common expressions into separate equations (hence increasing the size in terms of equations and variables) we could solve the larger models (≈400K variables and equations) fairly easily.

An linear example of such a problem is shown here: http://yetanothermathprogrammingconsultant.blogspot.com/2010/04/l1-portfolio-formulation.html.

An example of a nonlinear construct that should raise a red flag is something like:

In many cases it is better to write this as:

This will keep the number of nonlinear nonzero elements smaller at the expense of extra variables and equations.

For a smaller version of the model, the differences in statistics is striking (I was unable to get the large version to solve with the original formulation):

Unfortunately solvers and modeling systems don’t give much feedback on these issues. Such a diagnoses requires some modeling knowledge and experience (one reason why I am sometimes hired to help out).