I have been working on a hobby project for a while that involves finding all possible team rosters given the constraints of a salary cap and player positions while trying to N teams with the maximum projection. This is specifically for fantasy football, but the problem can be more generalized to a maximization problem. I can't find a more efficient solution than using nested for loops. I am using python dictionaries to track specific player data by position where qbs[playerName] = {Salary: X, Projection: Y} and rbs[playerName] = {Salary: X, Projection: Y}, etc.

The constraints are as follows:

I assume the two N’s in this description are different: one is the salary cap, the other is the number of solutions to be found. Let’s try to generate some random data: 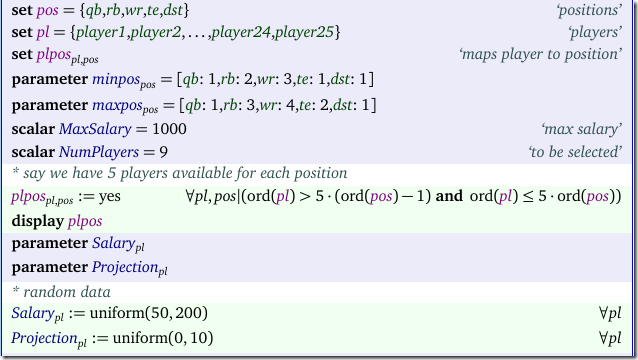 The basic model for one best solution is as follows: 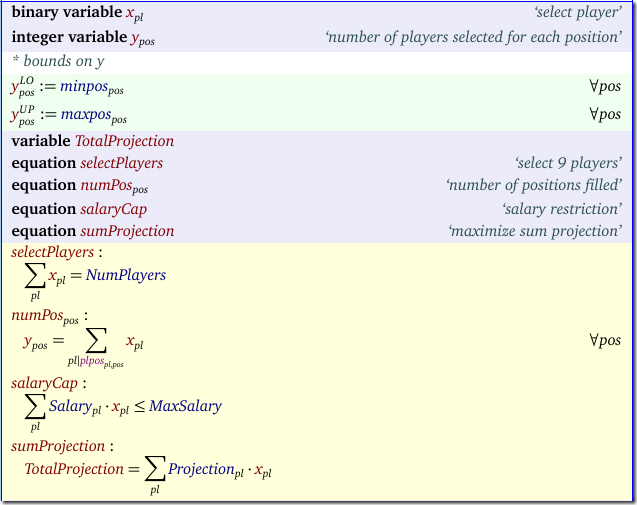 Note that we don’t strictly need the \(y\) variables. We can substitute them out (or relax them to continuous variables).

I assume we want to generate 10 solutions (see set \(sols\) below). The idea to find the 10 best solutions is to implement the following algorithm:

1. Solve MIP
2. If enough solutions: STOP
3. Add a constraint (cut) to the model that forbids the current solution
4. Go to step 1.

In the code below the cuts are expressed in equation \(cut_{sol}\), where \(sol\) is a dynamic set that grows each iteration. We start with the empty set: \(sol:=\emptyset\).

Usually the cut to prevent an earlier found binary solution vector \(x^*_i\) is as follows:

Because in integer programming we can see solution values like 0.99999, we just consider all values \(>0.5\) as one. When we run this code we see:

All 10 solutions obey the salary cap. The total projection (the objective) is slowly getting worse when we search for new solutions.

It is noted that some solvers provide tools to generate “next best” solutions more efficiently (e.g. Cplex’s solution pool).

I was pointed towards a related approach documented in this paper (1). I did not read it: the publisher charges $50 to download the pdf file (for 13 pages that is $3.85 per page, beating this paper).

Posted by Erwin Kalvelagen at 4:05 PM No comments:

Posted by Erwin Kalvelagen at 8:30 AM No comments:

Filling up a container with boxes

We have a rectangular container in which we pace some differently sized boxes (rectangles, this problem is 2D only). There is some space left, and we want to fill that with as many standard sized boxes as possible.

Here the yellow boxes are the original pay load and the blue boxes are the ones we were able to add. Note that we are allowed to rotate the rectangles.

This can be formulated by a Mixed Integer Programming or a Constraint Programming model. The main ingredient is a set of ‘no-overlap’ constraints. Here is some background information about these constraints. In our case things are slightly more complex as we allow 90° rotation.

The decision variables we use are as follows: 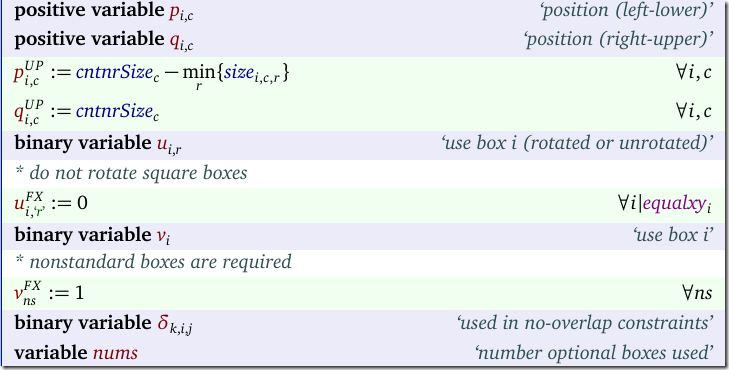 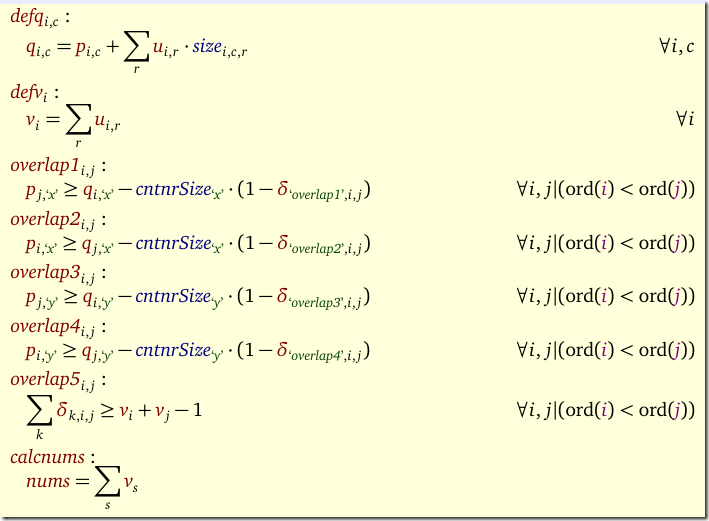 The model is not extremely complicated, although the rotation needs attention.

To get better performance we can add some symmetry-breaking constraints and use some branching priorities. Even then proving optimality is very difficult. However a good MIP solver will find very good solutions very quickly.

Posted by Erwin Kalvelagen at 10:56 PM No comments:

Non-convex Quadratic Programming problems are difficult to solve to optimality. Most QP solvers do not even accept non-convex problems, so how can we attack this?

The easiest is just to use a global solver. We can use global NLP solvers such as Baron, Qouenne or Antigone. In addition Cplex has a solver for non-convex QP and MIQP problems (you need to set an option for this: OptimalityTarget = 3; Cplex will not automatically use this non-convex solver). For these solvers make sure to set the gap tolerance (GAMS option OPTCR) to zero.

The KKT conditions for this QP are:

There are two complications with this LCP (Linear Complementarity Problem):

To make the above model amenable to a linear solver we first try to linearize the complementarity conditions. Let’s consider \((x-\ell)^T\lambda=0\). This can be attacked as follows. The condition \((x_i –\ell_i)\lambda_i = 0\) really means \(x_i=\ell_i\) or \(\lambda_j=0\). This can be linearized as:

The big-M coefficient are a problem of course. We either need to find some good values for them or use a formulation that does not need them. Some techniques that could help here are SOS1 (Special Order Sets of Type 1) variables where each combination \(y_i, \lambda_i\) (where \(y_i=x_i-\ell_i\) forms a SOS1 set. An alternative is to use some indicator variables (these are supported by a number of solvers).

The derivation of the linear objective is as follows:

It is quite fortunate that we are able to get rid of the quadratic term and form a linear objective. 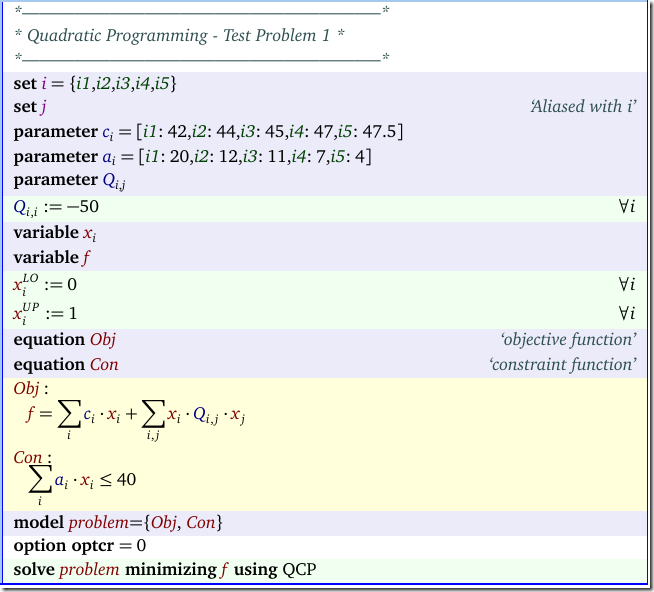 We name our duals as follows: 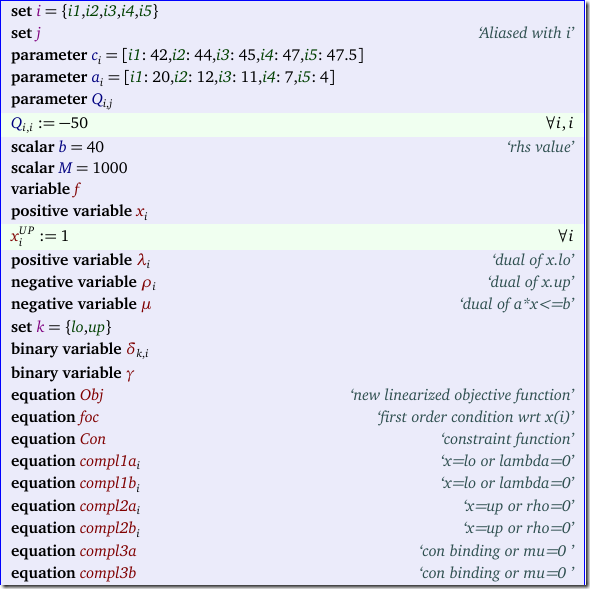 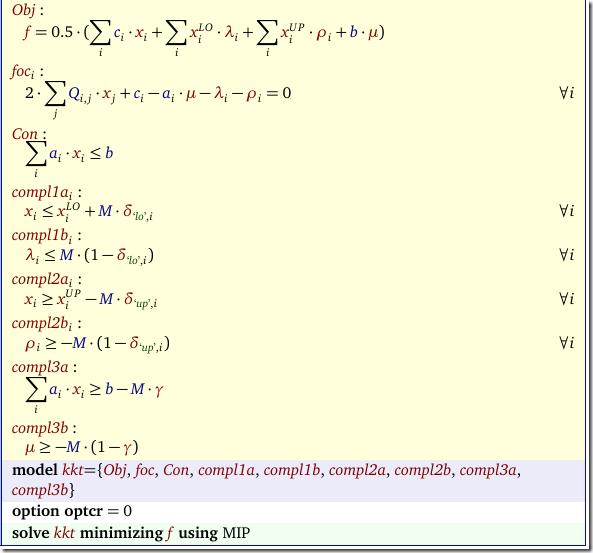 For some performance comparisons see (3).

4. A Comparison of Programming Languages in Economics 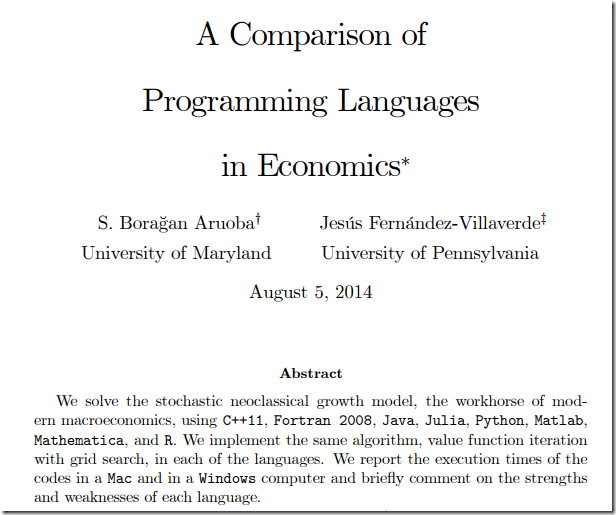 Posted by Erwin Kalvelagen at 3:43 AM No comments: 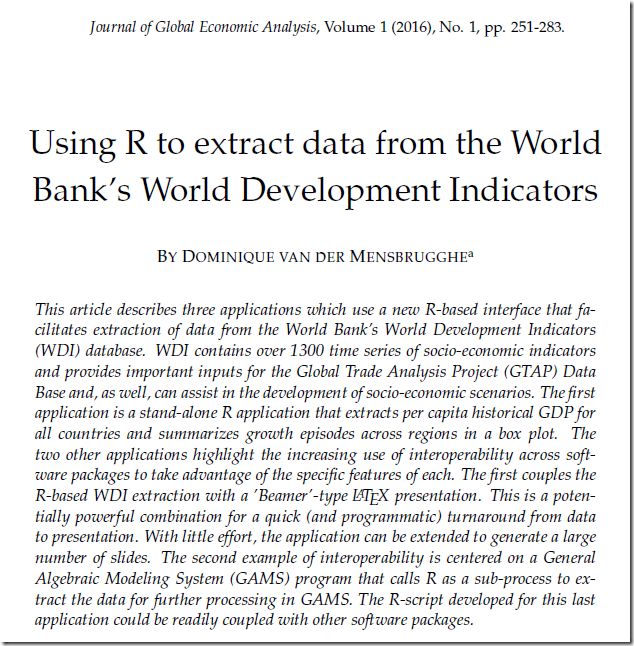 Posted by Erwin Kalvelagen at 6:51 PM No comments:

Getting GAMS data into Julia

Using gdx2sqlite it is very easy to populate a SQLite database from GAMS data. This should allow us to get data into Julia somewhat painlessly. Let's try:

Interestingly the format of the Data.Table is not as nice as advertised in https://github.com/JuliaDB/SQLite.jl, where we see:

I get rather ugly output, not a nicely formatted table. The trick seems to be to convert the Data.Table into a DataFrame. Note that it is important to import the DataFrames package before SQLite.

Posted by Erwin Kalvelagen at 7:44 PM No comments:

In many interpreted languages, the use of loops is discouraged, and “vectorized” implementations are preferred. This is the case for Matlab, R, Python and also GAMS. There are two main reasons:

Here is an example:

The first construct sets the diagonal of Q to 100. This really should be written as:

One could read this as an “implicit loop”. Similarly in the second construct we can drop the explicit loop and just write:

The loop used to populate the diagonal of the matrix Q is really the worst possible way to express this. Here are some suggestions for improvement:

The speed difference in the assignment of Q for a set i of size 2000 is remarkable:

To be complete, let’s detail how the GAMS $ condition works when placed left or right of the assignment. The construct

I seldom use the second form while I use the $ on the left all the time. This example shows this is with good reason.

Posted by Erwin Kalvelagen at 8:20 PM No comments: 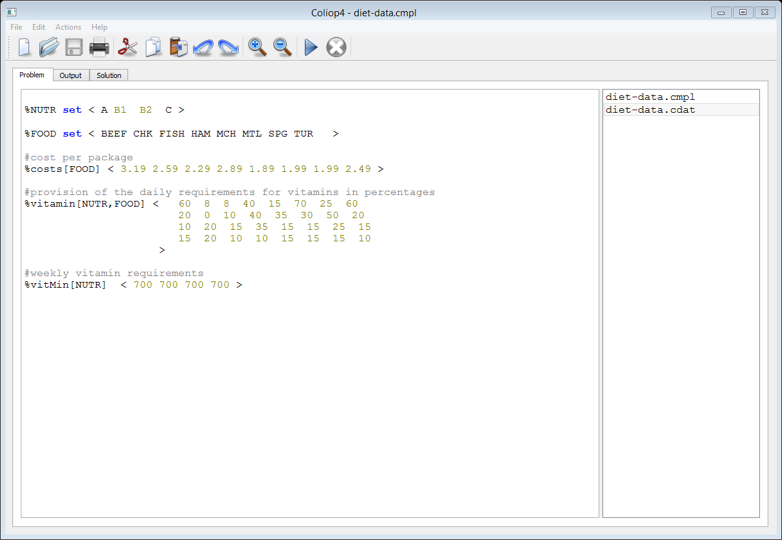 Posted by Erwin Kalvelagen at 6:46 PM No comments:

Three of the columns indicate objectives of an underlying optimization problem: Cost, Weight and Performance. The rows correspond to the Pareto optimal set.

In (1) an algorithm is shown to find a subset, called k-optimal solutions. For this we need to calculate the following. First define a function \(\Gamma(v)\) which compares one objective function value \(k\) between two different points \(i\) and \(j\). Let’s assume minimization for all objectives, then we have:

Obviously this is an operation that is quadratic in \(n\).

We have another small vector objs that as the objective names and the direction (\(1\)=minimize, \(-1\)=maximize):

Attempt 1: use the data frame directly

That is really terrible.

Attempt 2: use a matrix

One bottleneck could be the use of a data frame. The most inner loop jumps from one column to the next, and that is a relatively expensive operation. Let’s try to convert the data first to a matrix and then operate on the matrix:


This is much better:

To get better performance we should get rid of these loops somehow. In R loops are very slow. In C++ loops don’t have this disadvantage, so instead of trying to vectorize this (besides I don’t see immediately how), let’s use some C++ code.

The Rcpp package makes it very easy to develop C++ functions for use inside R. We assume again we first make a matrix \(A\). The C++ code looks like:


Note that R matrices are stored column-wise (the old Fortran way). We use this function as follows:


The timings are now:

This is more than fast enough to allow for some experimentation with this data set.

Here we do the same computation in GAMS.

The time needed for the full problem is:


GAMS is actually doing very well on this.

Posted by Erwin Kalvelagen at 1:17 AM No comments: