What if you go bigger? Here some results with two of the leading commercial LP solvers (using default settings) compared to GAMS: 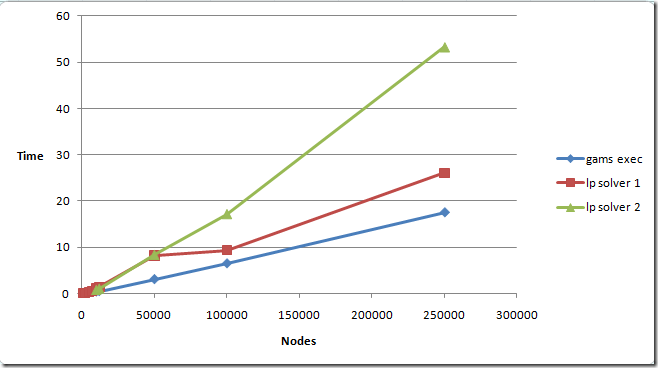 LP solution times are a little bit more unpredictable (in this case this is positive: somewhat quicker than thought by extrapolating from first picture in more-on-network-models.html), but GAMS execution time (including generation time) is still nicely linear.

Posted by Erwin Kalvelagen at 5:10 PM No comments: Links to this post

I am starting to work on a problem that looks like a shipping problem I worked on earlier: garments (shirts) are sent from China to stores in the US either directly in a number of packages containing standard contents or through a US warehouse. The cheapest is to send the standard boxes from China but as there are just a few standard configurations, stores will need to be supplied with additional shirts from the US warehouse. Shirts come in different sizes. 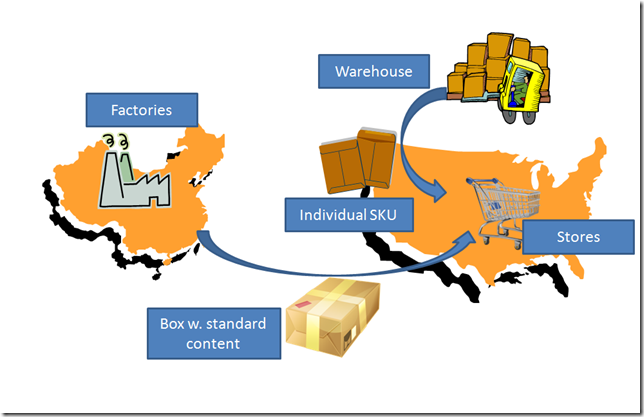 All quantities with bars are parameters (constants). Even though this is a simple model it was not completely trivial to get good solutions:

Posted by Erwin Kalvelagen at 10:36 AM No comments: Links to this post

For pure bin packing problems some really good heuristics exist. For the problem illustrated in http://www.developerfusion.com/article/5540/bin-packing/ one of the best solutions is: So if we solve to optimality, do we gain a lot? From http://en.wikipedia.org/wiki/Bin_packing_problem is looks doubtful. Indeed when I solve:

we get an optimal solution with 17 bins.

Of course as discussed in http://yetanothermathprogrammingconsultant.blogspot.com/2011/07/scheduling-of-tv-advertisement-theory.html my real models are almost always much more complicated than shown in these stylized bin packing examples. In those cases a MIP-based solution algorithm can be even more worthwhile than a (simple) heuristic as there is more room for improvement. In the real case we dealt with a complicated multi-objective model where our model seems to outperform the heuristic in almost all objectives. This is the case even after the heuristic was improved using some fine-tuning after looking at our solutions.

Posted by Erwin Kalvelagen at 1:55 PM No comments: Links to this post

I received some additional questions on solving some very large network models. Basically we used the formulation presented here: http://yetanothermathprogrammingconsultant.blogspot.com/2011/06/network-formulation.html. A slightly more optimized version is shown below: 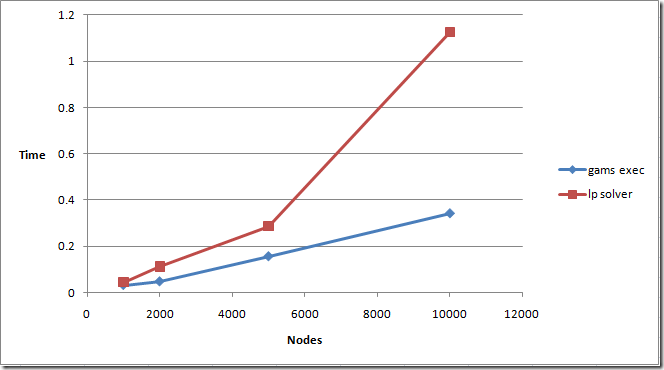 The main difference with the earlier model is that we replaced:

This actually saves some time and memory. In the first case we set many x.up’s to zero even though they are not used in the model. These variables with non-default bounds will need to be created and use up memory. In the second case, we only touch variables that are really used.

This small change makes a lot of difference for larger models. For n=5k we see GAMS execution time decrease from 3.775 seconds to 0.156 seconds. If things get large one needs to pay attention to detail!

This formulation is not handled very efficiently by AMPL: the timings for n=5k are

Especially the calculation of the set arcs is expensive.

Note that if we use an alternative for arcs:

the burden is moved to x:

When we run a few different instances we see we do something causing non-linear scaling: 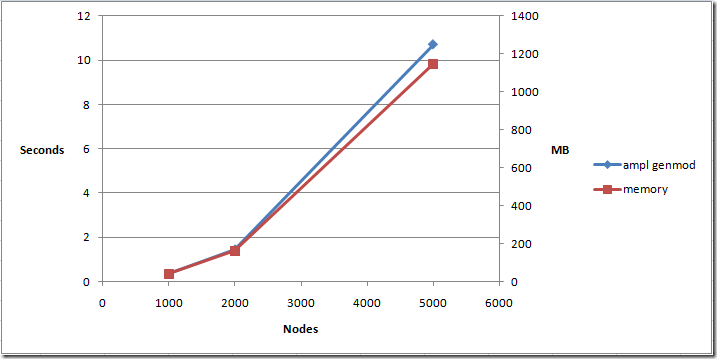 It is clear this is not a good approach. We need to do something about this set arcs. In AMPL we don’t really need to calculate this set, we can directly populate this from the data by replacing in the data file:

Now we get the set arcs basically for free, and we get linear scaling: 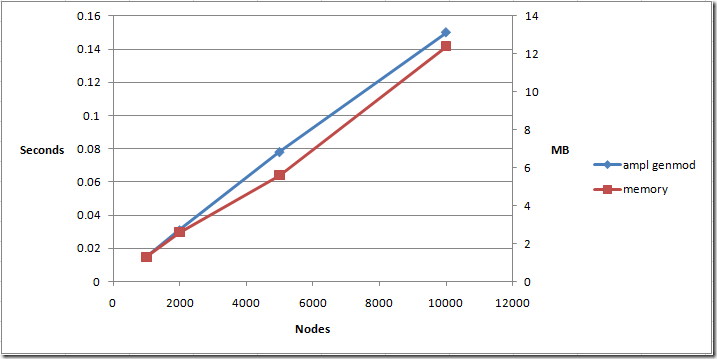 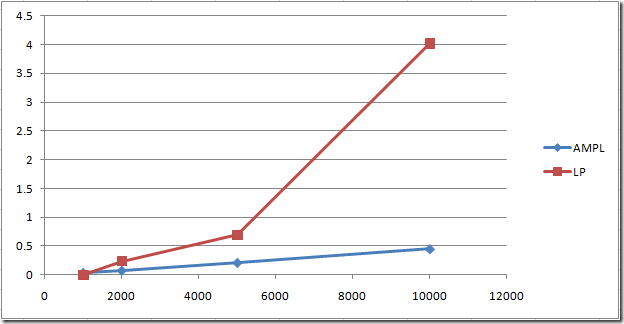 This is very close to the GAMS timings given that this was on a different machine.

The open source tool GLPK can handle many AMPL linear models. However, in some cases it is substantial slower. This model demonstrates this behavior. We run the model as:

Besides being much slower than AMPL, the performance of the model generation phase is showing more than linear scaling:

Model generation is here calculated as total elapsed time minus time used for the LP solver.

Posted by Erwin Kalvelagen at 4:52 PM No comments: Links to this post