In this post a simple MIP problem is posted. Basically the problem can be stated as:

We have a database of 153 players, and we want to compose the best team of 6 players with a total salary cap of $50k. This can actually be done in Excel quite easily. With some random data I get the following results using the Simplex LP based MIP solver: 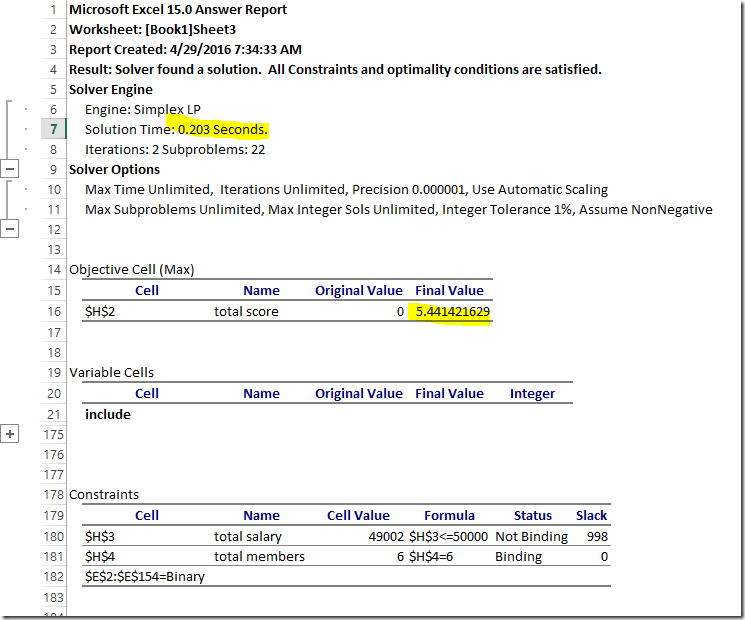 The name “Simplex LP” is somewhat misleading, as we solve here a MIP.

Some comments in the post are really surprising to me:

Below is the result from a run with the same data using the Evolutionary solver: 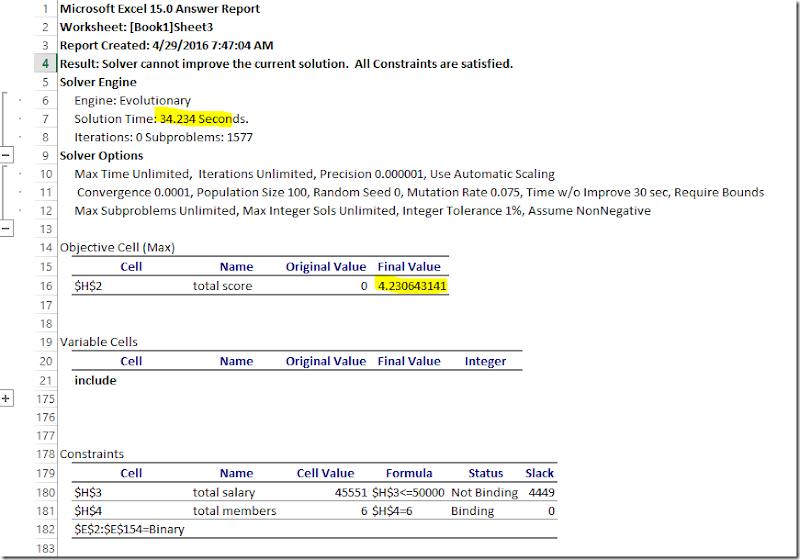 My advice: always try a MIP model first. The model building process forces you to understand the problem better and a MIP solver can give proven optimal solutions (or a guaranteed quality when we allow a gap between best possible and best found solutions). If the performance is not satisfactory then consider using a meta-heuristic. (The MIP model an also be used then to debug the implement the meta-heuristic and compare the quality of the objective function values).

Posted by Erwin Kalvelagen at 7:29 AM No comments:

The end of (numeric) error

John Gustafson suggest to use a new data type called ‘unums’. They form a superset of the floating point numbers. "Unums are to floats what floats are to integers" 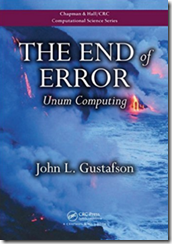 Posted by Erwin Kalvelagen at 10:01 AM No comments:

In (1) and (2) an interesting problem is described: the aircraft landing problem. We have an airport with m runways, where we want to schedule aircrafts to land. Each aircraft has a target landing time and some allowed time window (it can land a bit earlier or somewhat later; typically the window is not symmetric around the target landing time). There is a required time between two landings (separation time) depending on the type of aircraft and the assigned runway. If two planes are scheduled on the same runway the separation time is longer than if they land on different runways.

The MIP model shown in (2) is as follows: 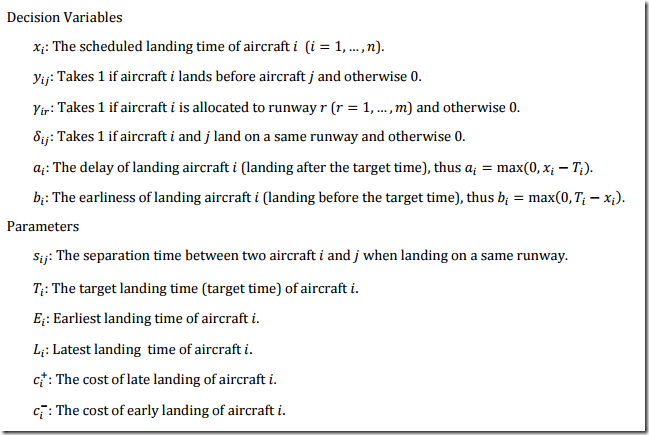 As usual I have some comments on the equations. Below I discuss each equations in turn (the numbers correspond to the equation number).

In summary, here is my version of the model: 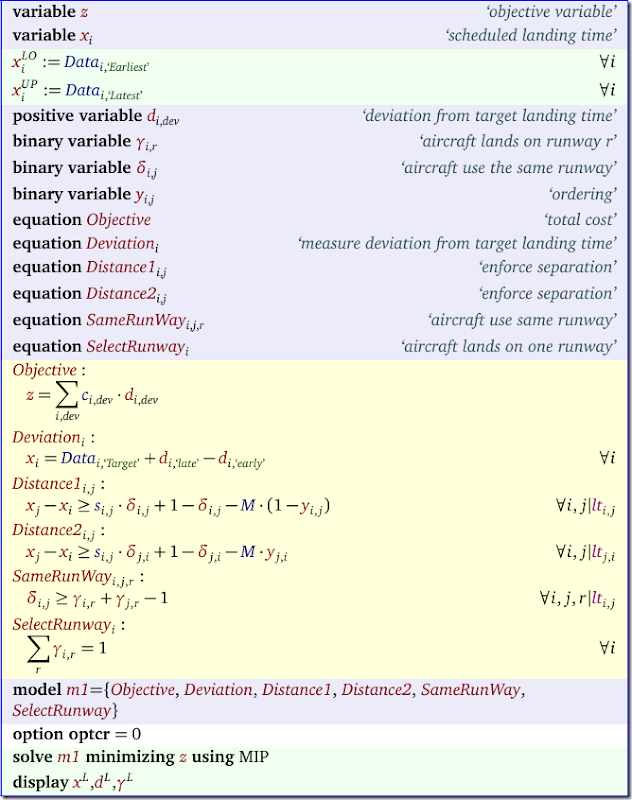 The performance of the new formulation looks good at least on one small data set using 2 runways:

Some of the larger problems (n=44,n=50) are actually even easier to solve.

I am not sure how to depict the solution. Here is an attempt: 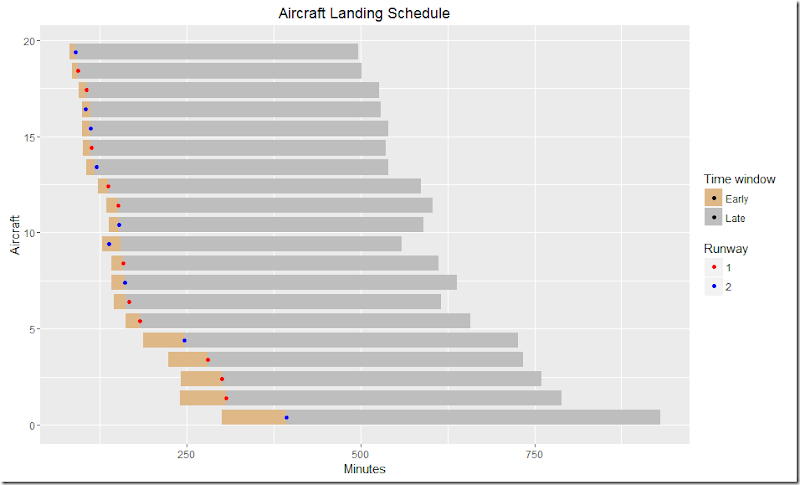 The dots indicate when a landing is scheduled and on which runway.

As usual: there is always a lot to think about, even for a small model like this.

Posted by Erwin Kalvelagen at 3:10 PM No comments:

This is a follow-up on this post. For large datasets using individual inserts is not as efficient as applying bulk operations. In MySQL bulk inserts can be done with the LOAD DATA LOCAL INFILE command. This statement takes a local (i.e. at the client) text file, copies it to the server and then does a bulk insert of the whole thing. This approach is built in the tool gdx2mysql. If a symbol has more than N records (N=500 by default), then we write a text file and call LOAD DATA LOCAL INFILE. If a symbol has fewer records then we just a standard prepared insert statement. A verbose log will show what happens.

The smaller set i is imported using normal inserts, while the larger parameter a is imported through an intermediate text file. This is much more efficient than using the standard inserts. There is a gdx2mysql option to force larger symbols to use standard inserts, so we can compare timings:

So we are about 6.5 times as fast. (We can expect even larger differences in other cases).

A final way to make imports faster is to use ISAM (or rather MyISAM) tables. ISAM is an older storage format (MySQL nowadays uses the InnoDB storage engine by default). However ISAM is still faster for our simple (but large) tables, as can be seen when running with the –isam flag:

This again makes a substantial difference in getting data into MySQL.

Finally a test using the a model with many symbols: indus89. It is noted that Cplex solves the LP model in less than a second and we need 29 seconds to store everything. Of course in practical situations we don’t store all symbols of a model (i.e. all sets, parameters, variables, equations - both input and output and intermediate results) but only solution information that is of interest. Here we use the default settings (i.e. non-verbose output).

Posted by Erwin Kalvelagen at 4:51 AM No comments:

Dump solution data into a MySQL database I

For a project where I needed to write a solution data set from a GAMS GDX file into MySQL database, I developed a tool gdx2mysql. The call is:

Here tmp is the target schema (or database). The default server is localhost which is what we use in this application. The tool will try to pick the latest ODBC driver installed. When using the trnsport model from the GAMS model library  (yes, transport without the ‘a’, a relic from 8.3 filenames we used to be limited to), we see:

To see what is happening behind the scenes use the –v (verbose) flag:

There are a few interesting issues we deal with:

Posted by Erwin Kalvelagen at 12:36 PM No comments:

Being a Data janitor: time spent on simple data stuff

It is often underestimated how much time one needs to spend to make sure the input data is suitable for use in a mathematical programming model. Math models are typically based on some form of simultaneous equations (LP, MIP, and NLP models fall into this category), and these models are very sensitive to data being correct. If there are problems with the data there are good chances your model will fail miserably. As a result, if the model is data intensive, be prepared to spend a lot of time on the data. 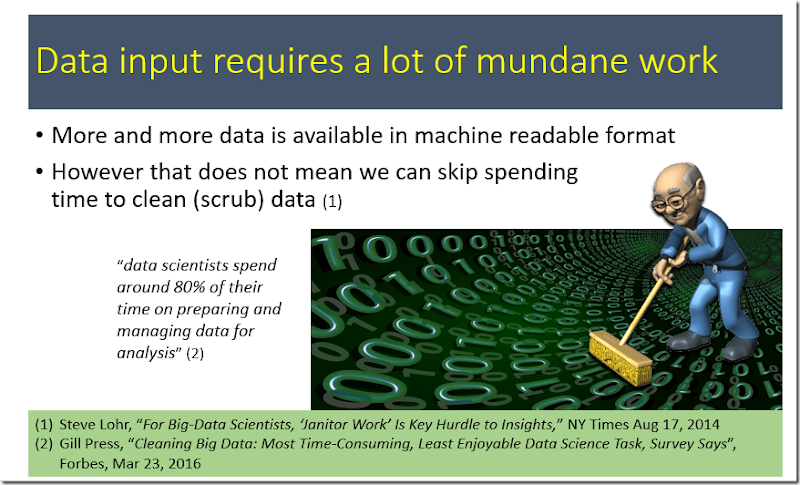 Posted by Erwin Kalvelagen at 6:49 AM No comments:

Perspectives on a mathematical programming model

If we take a step back, a complete functioning mathematical programming model consists of three parts:

As a modeler the middle part has the most emphasis. This is where a model builder puts most of the intellectual effort. However for many users the “algorithm” is just a somewhat of black a box (it just should work quickly and reliably), and they typically are much more engaged with respect to the input and output pieces. Often users have more more demands and feedback about these parts (“place that button here”, “this color should change”, “use a display with 2 decimal digits”).

In a slide I used in a recent talk I depicted this as follows: 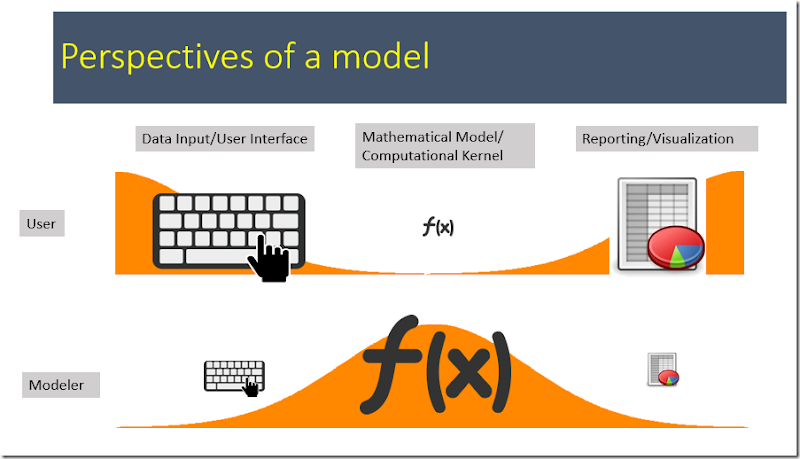 Posted by Erwin Kalvelagen at 5:40 AM No comments:

In the post http://yetanothermathprogrammingconsultant.blogspot.com/2016/04/csv-file-too-large-to-view-or-import.html I discussed how to use a CSV file as an external data source for an Excel pivot table. This trick will allow us to view large data sets that don’t fit easily in Excel. In this post I want to expand a little on this, and show how a large GAMS solution set can be exported to a CSV file and how we can base a pivot table on this. This is all automated using a simple script.

There are actually models around that generate a ton of solution results. In some case, comprehensive reporting asks for mixing in some input data for reference. That means the total amount of data used for reporting can be very large. 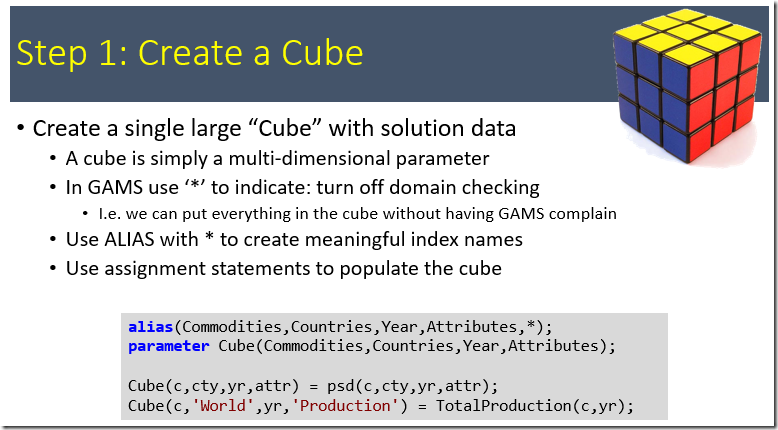 In the above example we just have a few assignments. In practice we may have numerous assignments to populate the cube.

First export to a GDX file and then convert to a CSV file. 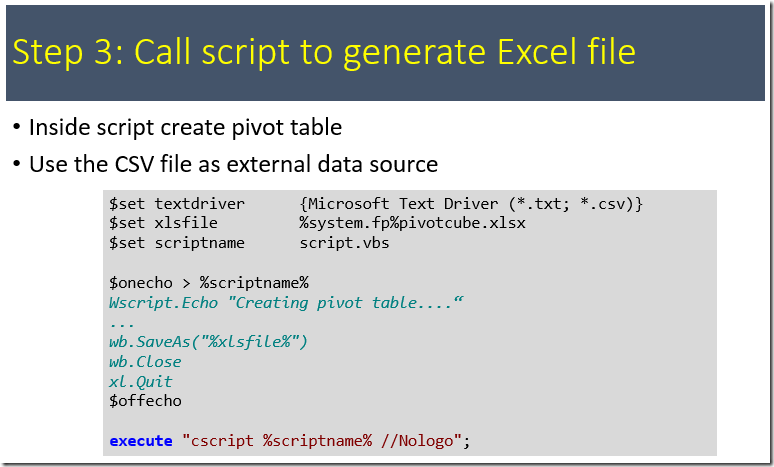 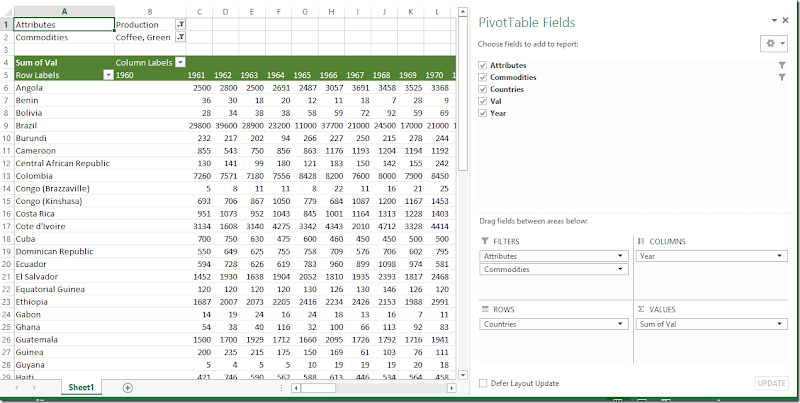 Posted by Erwin Kalvelagen at 12:55 AM No comments:

CSV file too large to view or import with Excel

Excel has a hard limit of 1 million rows. This limit also holds for the 64 bit version of Excel: it is more related to the way row numbers are stored than running out of memory. When you try to open a CSV file that is larger, Excel will truncate the data: 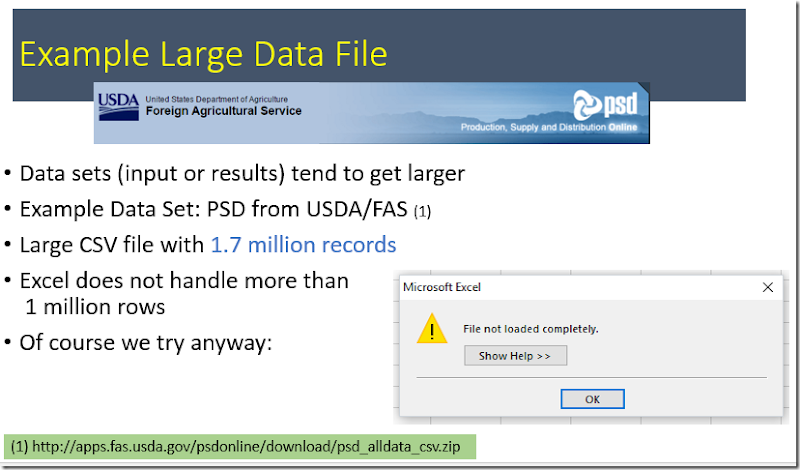 One way of viewing such a file is to keep the data as a CSV file, and use a Pivot Table with an external data source. Usually Pivot Tables use data stored in a different sheet. But it is also possible to have the raw data stored in an external database. A CSV is file is just a database table when we use ODBC with the Text Driver. This way we can pivot the table (e.g. years as columns) and select slice (e.g. we likely want to see one commodity and one attribute type at the time). 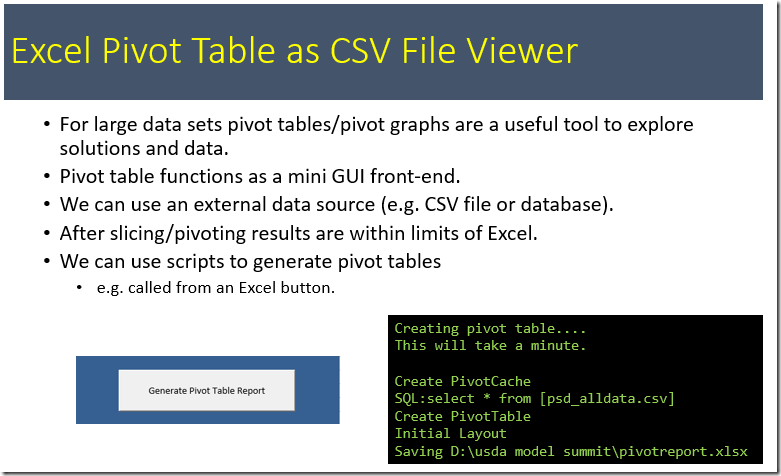 With the script we make sure the initial layout make sense, i.e. it has something useful to show (Coffee production in Antarctica is likely to be non-existent so that would be bad example to start with). 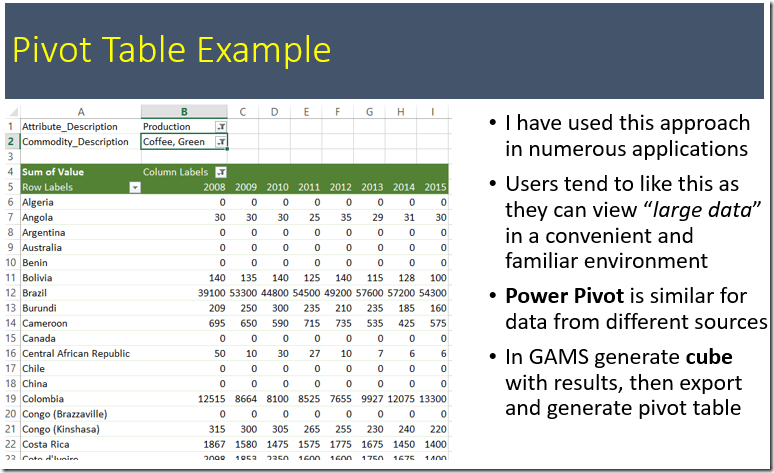 In the sheet with the pivot table we have at the top two drop down menus where we can specify which attribute and commodity to select. 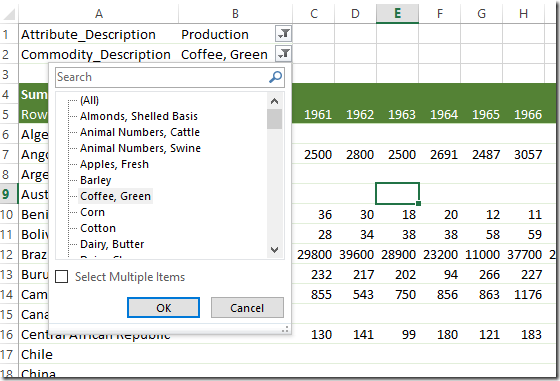 I use this technique quite often to view large data sets.

Posted by Erwin Kalvelagen at 4:36 PM No comments:

R has the well known read.csv function. Using a data set from USDA/FAS there was a bit of a surprise: 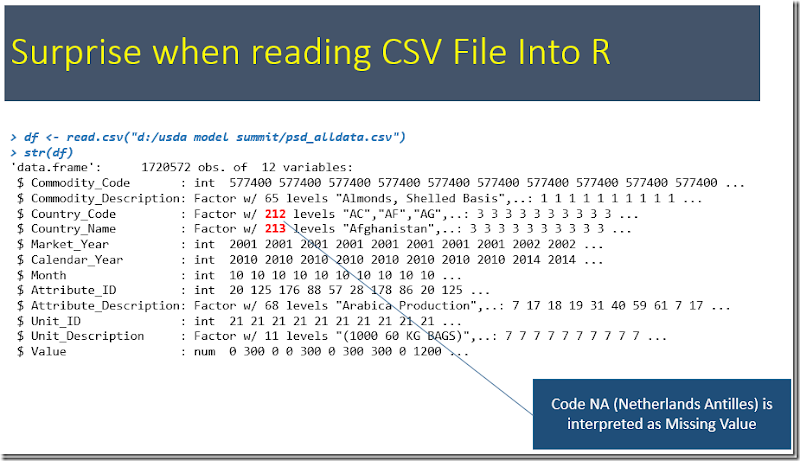 In the data frame df we expect that the number of different country codes is identical to the number of different country names. It isn’t. It turned out that one of the country codes is NA (Netherlands Antilles). By default this will be interpreted as a missing value (also known as NA).  The solution is to set the optional argument na.strings = NULL. What would have been the simplest approach to quickly find the problem?

Posted by Erwin Kalvelagen at 3:24 PM No comments:

This does not look right at all.

Note: looks like this is fixed in newer versions. My python system also seems to do the right thing: 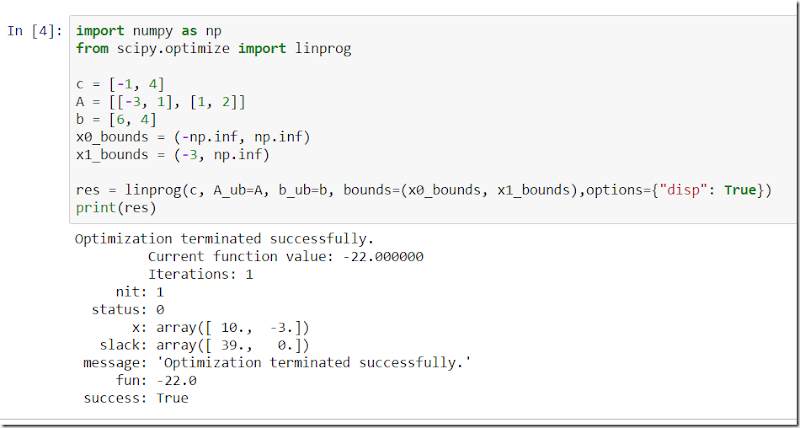 Posted by Erwin Kalvelagen at 4:54 PM No comments:

The MySQL workbench has a handy tool to import CSV files: 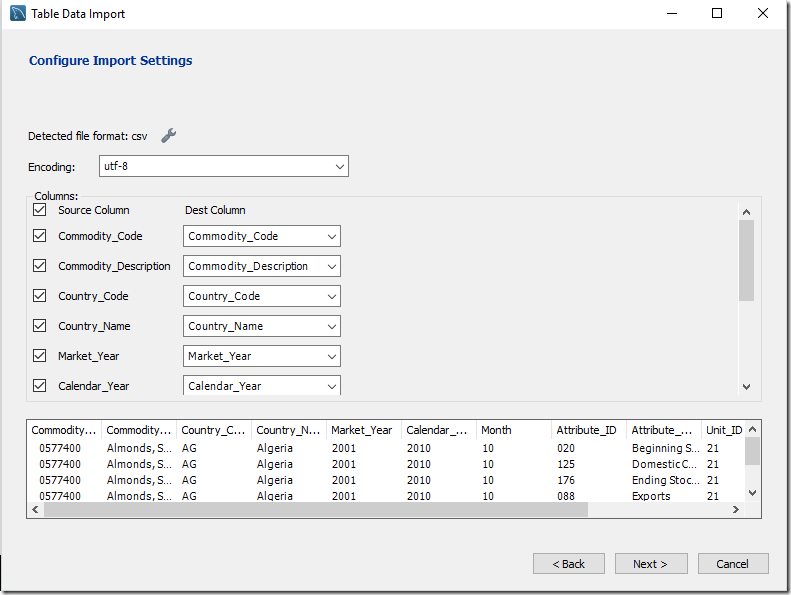 Unfortunately it is extremely slow. Here are some timing figures when compared with the LOAD INFILE command.

Timings are in seconds. Extrapolating this, it would take about 22 hours to import my 1.7 million record CSV file using the Import Wizard. I suspect this method will commit after every row, which is often a performance killer. So better use the LOAD INFILE command: 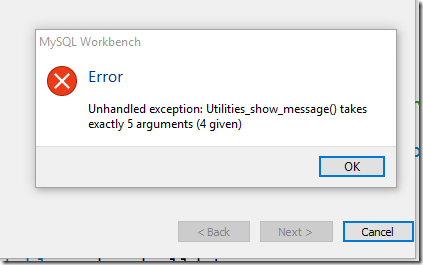 Posted by Erwin Kalvelagen at 6:11 PM No comments:

Some funding became available to add a Web based visualization tools to a larger engineering design application. Below is a depiction of the architecture. The solution points are (all or many) Pareto optimal solutions. Existing tools to visualize solutions were coded in Matlab. The new HTML and Javascript based output will allow easier dissemination of results (in addition to Excel based reports). 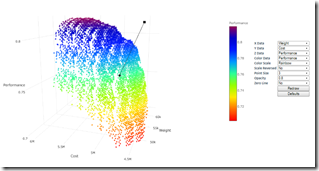 Two-dimensional plots are based on Bokeh. 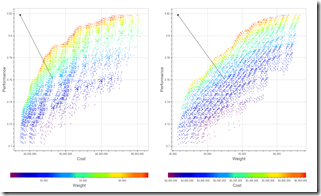 To view results with a surrogate data set click on the above figures. The HTML documents contain all data and large Javascript libraries so they take a little while to load. I am quite impressed with both Plotly and Bokeh, they offer quite some functionality. It is convenient to be able to give end-users advanced visualization capabilities without having them to install anything.

Posted by Erwin Kalvelagen at 12:08 AM No comments: