In some recent projects, I was working on using algorithms implemented in C++ from R and Python. Basically the idea is: Python and R are great languages for scripting but they are slow as molasses. So, it may make sense to develop the time consuming algorithms in C++ while driving the algorithm from R or Python.


The standard way to build interfaces between R and C++ code is to use Rcpp [1,2]. 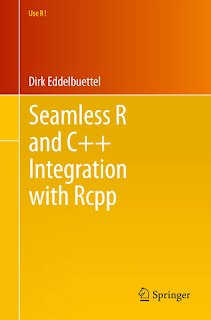 It is possible to directly interface R with low-level C code, This will require a lot of code and knowledge of R internals. Rcpp automates a lot of this. E.g. Rcpp will take care of translating an R vector into a C++ vector.

Rcpp supports both small fragments of C++ code passed on as an R string to more coarse-grained file based approach [3]. For Windows, you need to download the GNU compilers [4].

If you are new to both  Rcpp and to building your own R packages [5] things may be a bit overwhelming.

Rstudio can help a lot. It supports a lot of very useful tasks:


Basically I never have to leave RStudio.

I have added an alternative driver file for my C++ code so I can debug it in Visual Studio. I used it only a few times: most of the time I just used RStudio.


pybind11 [6] is in many respects similar to Rcpp, although it requires a little bit more programming to bridge the gap between Python and C++.

In the beginning of the above Youtube video [7], the presenter compares pybind11 with some of the alternatives:


As with Rcpp, calling the compiler is done through running a build or setup script. For Rcpp I used the GNU compilers, while pybind11/pip install supports the Visual Studio C++ compiler. This also means that if you have little experience with both pybind11 and creating packages, the learning curve may be steep.

Posted by Erwin Kalvelagen at 2:08 AM